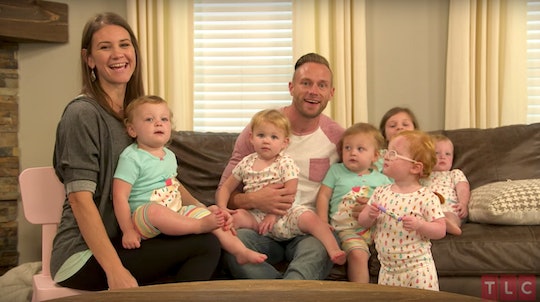 When you go from having one daughter to six pretty much all at once, it's 100 percent guaranteed that your life will change pretty drastically — and so will your finances. Of course, signing a reality show contract could help to assuage the inevitable blow to the bank account. It's certainly a source of income for Adam and Danielle Busby, who star along with their 2-year-old quintuplets and their older daughter, 6-year-old, Blayke, on the TLC hit OutDaughtered. The show is popular enough that it just launchd its third season. So, given the exposure, what is Adam and Danielle Busby's net worth?

The Busbys have been open about the fact that managing their finances hasn't exactly been a walk in the park since Ava, Riley, Hazel, Parker, and Olivia were born. "It's been a big drop because I used to work full-time and we had two incomes coming in," Danielle told People late last year, reflecting on having to quit her job in order to take care of the literal influx of daughters. "... We budget and we do what we can to make ends meet and make it work."

Cutting down to one income would certainly mean taking a hit, especially when that income supports a family of eight. But all the Busbys are earning their keep on OutDaughtered, and it's likely helping them to maintain the lifestyle they do.

While information on how much the Busbys earn per episode is not publicly available, we know that it can be a boon for the pocketbook. For example, reality producer reality producer Terence Michael hypothesized that the Kids and Counting-era Duggar family raked in between $25,000 and $40,000 per episode back in 2009, according to E! News. The same year, Jon Gosselin of Jon & Kate Plus 8 said in a CNN interview that each episode of the show brought in $22,500 for its stars.

Of course, both of those shows were major hits back in their heydays — the OutDaughtered crew may not be household names like the Duggars just yet. Still, HowRichIs.org estimated Danielle's net worth to be at a cool $300,000, which is certainly a nice chunk of change in the bank (if those estimates true, that is).

And the family has another source of income. In addition to Adam's job as a key account manager, the couple recently opened a cycling class business called Rush Cycle. So that will undoubtedly help line their bank account a bit more as well.

Whatever the Busbys' finances and net worth, let's hope that TLC is taking good enough care of them that they decide to do at least three more seasons of OutDaughtered. Because that much cute should never go off the air.