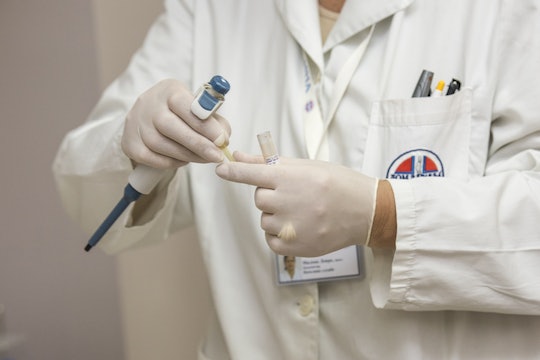 What Is AFM? The Polio-Like Disease Is On The Rise

Now that fall has arrived, Zika is becoming less of a concern, but there's a new illness on the rise, according to CNN. The Centers For Disease Control have reported a spike in acute flaccid myelitis or AFM, a polio-like disease that affects the nervous system and can cause paralysis. Between Jan. 1 and Aug. 31, 50 cases, mostly in children, were reported. The cases were spread across 24 states. The last spike was in 2014, with 120 diagnoses in 34 states. The disease is quite rare, but it's a very serious illness.

There are several known causes for AFM, according to the CDC. Viral causes include poliovirus, enterovirus, West Nile virus, Japanese encephalitis, Saint Louis encephalitis, and adenovirus. But there are also non-viral causes, such as environmental toxins, genetic disorders, and Guillain-Barré syndrome. There are still other causes that are unknown. The 2014 spike was thought to be related to an outbreak of Enterovirus D68, a severe respiratory illness.

Symptoms are sudden, and include limb weakness and facial drooping, as well as difficulty moving the eyes, swallowing, or talking. Numbness, tingling, arm or leg pain, and respiratory failure are less common. Speaking with CNN, pediatric infectious disease specialist Dr. Kevin Messacar stressed that there is a "wide spectrum of severity of this disease."

AFM is diagnosed by examination and testing of muscle tone, reflexes, and nerve response. Spinal fluid can also be tested, and magnetic resonance imaging (MRI) may be used to look for lesions in the gray matter of the spinal cord. While there is no specific treatment or cure for AFM, doctors may be able to manage the symptoms. But again, it's a very rare disease, so there's probably no need to keep a neurologist on speed dial.

Only 21 cases of AFM were reported in the United States in 2015, spanning just 16 states, so it is on the rise, but the cause is still unknown. As such, prevention can be hard to nail down, but it's crucial to avoid the known causes. The CDC cautions the public to stay up to date on polio vaccines – and all vaccines – which of course we should all be doing anyway. Mosquito-borne causes such as West Nile virus can be avoided by using insect repellent, staying indoors at dusk and dawn, and eliminating standing water, which, again, we should all be doing anyway. Finally, close contact with sick people should be minimized, and everyone should wash their hands after touching anything gross, and before touching anything not gross. Just common sense, really.