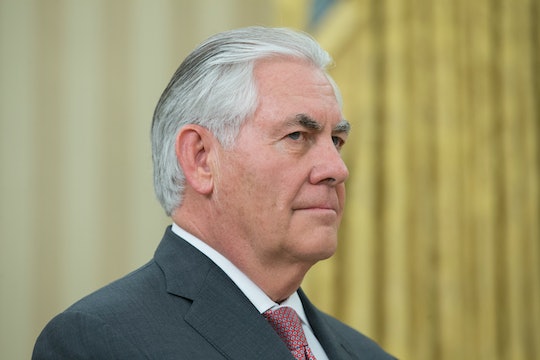 What Is An Alias Email? Tillerson Faces Scrutiny

In a letter filed in court Monday by the office of the New York Attorney General, Attorney General Eric Schneiderman alleged that from “at least 2008 to 2015,” Secretary of State Rex Tillerson used a pseudonym email “to send and receive materials regarding important matters, including those concerning to the risk-management issues related to climate change.” According to the letter, Tillerson — whose middle name is Wayne — used this second alias email address, dubbed the “Wayne Tracker" email, to discuss climate change during his time as chairman and CEO of ExxonMobil. Schneiderman is now investigating whether ExxonMobil made “significant misrepresentations” regarding the risks of climate change to shareholders during Tillerson's time there and during the period he used that second email. But what is an alias email? Since Rex Tillerson allegedly used one and people are concerned, it's a term you might be hearing more often in the future.

Romper reached out to Tillerson and the U.S. Department of State for comment and did not immediately receive a response.

According to the Independent, Schneiderman made the claim in a letter Monday to Justice Barry Ostrager in Manhattan in New York State court, and in that letter, he accused Exxon of failing to turn over all relevant documents required by a court order. Exxon Spokesman Alan Jeffers said in an email that Tillerson used the account for “secure and expedited communications between select senior company officials and the former chairman for a broad range of business-related topics,” after his primary account started to receive too many messages.

Understandably, all this talk of primary accounts versus secondary versus alias accounts versus pseudonym can get a little confusing. What exactly does it all mean? What is an alias email, and why are people concerned that Tillerson allegedly had one?

The email address in question, Wayne.Tracker@exxonmobil.com, is part of the company's email system, according to NBC News and a statement made by Exxon Spokesman Jeffries. So it's not a separate, unknown account the secretary of state was using at the time. The explanation the company is giving is that his main, or primary, account with Exxon was receiving too many messages, as reported by the Independent. So the secondary — or pseudonym, or alias — email was set up to handle more, and the contents and communication there covered a broad spectrum of topics. As reported by BuzzFeed, Exxon has stated:

Media reports indicating that emails to or from this address were exclusively for climate-related topics are false. ExxonMobil believes the risk of climate change is clear and warrants action.

An alias email could be something as simple as someone wanting to have two different, say, Twitter accounts under two different email addresses. So the everyday person might head over to Gmail and set up an email similar to their main one, but throw in, say, their middle initial to differentiate the two slightly.

The problem in Tillerson's case is as follows: Schneiderman argued in the letter that in the course of a fraud investigation into the company, it was found that, according to BuzzFeed, “Despite the company’s incidental production of approximately 60 documents bearing the ‘Wayne Tracker’ email address, neither Exxon nor its counsel have ever disclosed that this separate email account was a vehicle for Mr. Tillerson’s relevant communications at Exxon."

If, as the New York attorney general is alleging, ExxonMobil made “significant misrepresentations” in regards to the risks posed by climate change to its shareholders, and Tillerson used this alias email in communications about the topic, and additionally the company stopped cooperating in the investigation after Schneiderman subpoenaed ExxonMobil for documents in the case which could involve that separate email address, that all could spell trouble for Tillerson.

When it comes to free, simple email accounts through something like Gmail or AOL.com, it's easy for someone to set up multiple accounts to organize emails, direct communications in regards to other accounts online to various related addresses, or just because someone feels like having more than one account. Such sites make the process easy.

But if someone works for a company under investigation, or the government, and they don't reveal important information regarding alias accounts, that raises red flags.