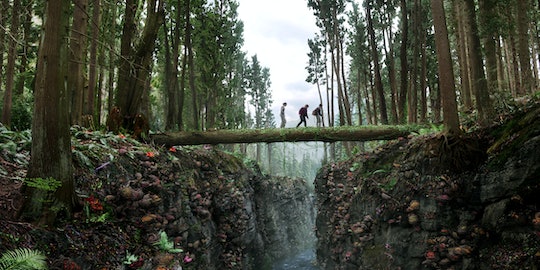 This Important Destination On 'Lost In Space' Actually Exists IRL

Warning: spoilers ahead for Episode 4! Four episodes into its first season, Lost in Space began to expand its universe, shedding some light on important details of the Robinsons' mission that it had only hinted at in previous episodes. Other survivors of other Jupiters entered the story, all of them marooned in an unknown world after being thrown off course from Alpha Centauri. But what is Alpha Centauri on Lost in Space?

Alpha Centauri is where the Robinsons were supposed to have ended up, if everything had gone according to plan. It was intended to be the location where the Robinsons (and the other travelers) resettled, as shown in the introductory video that Penny and Will watched in Episode 4. The video promised prospective residents of Alpha Centauri lush surroundings including farms and waterfalls, with plenty of space to form their new society. That was the ultimate goal of making the 26 trillion mile journey to Alpha Centauri, after all: the best and brightest were being sent along to build a new community. The video made it look almost like a spa, or a luxury resort.

Unfortunately, it's impossible to say whether any of the Jupiters will ever actually make it to Alpha Centauri.

Thanks to the bizarre oil-eating eels that made their way into the reserves of the various ships, no one has enough fuel to launch off the planet they've all been trapped on. They can't send communications back to station they left from either, because it seems the Resolute's satellite crashed along with the other ships. In prior episodes Maureen had seemed surprised that they were able to land in the galaxy they landed in, so taking off might be a problem even if there was enough fuel. Everyone is stuck for the foreseeable future, making the journey to Alpha Centauri seem more and more like a pipe dream.

Unlike the strange planet the Robinsons crashed onto, which appears to be wholly fictional, Alpha Centauri is very real. It's the closest star system to our own, which might be why the people of Earth in Lost in Space decided it would be the ideal place to establish a colony. There are three stars in Alpha Centauri: Alpha Centauri A, Alpha Centauri B, and the red dwarf Alpha Centauri C (also known as Proxima Centauri). What's remarkable about the solar system isn't just that it's so close to our own, but that there was an Earth-size planet found in the habitable zone of Proxima Centauri. According to NASA, a planet-hunting affiliate at their Jet Propulsion Lab named Olivier Guyon said:

This is really a game-changer in our field. The closest star to us has a possible rocky planet in the habitable zone. That's a huge deal. It also boosts the already existing, mounting body of evidence that such planets are near, and that several of them are probably sitting quite close to us. This is extremely exciting.

A habitable zone is when a planet is positioned in a solar system in just the right spot to have water and sustain life. Maureen made mention of it back in the first episode when marveling at the fact that they accidentally found themselves on a planet with breathable air and drinkable water. It can also be called the Goldilocks zone, because it's just right — like the porridge of the fairytale, it's neither too hot nor too cold. Earth is in one such spot, which has allowed the world to flourish as it has, and it seems there's the possibility of another Earth-like planet near Proxima Centauri.

Though Alpha Centauri was also the intended destination of the Robinson family in the original Lost in Space from the 1960s, it feels a lot more real as a possibility based on what science has discovered in the decades since then.