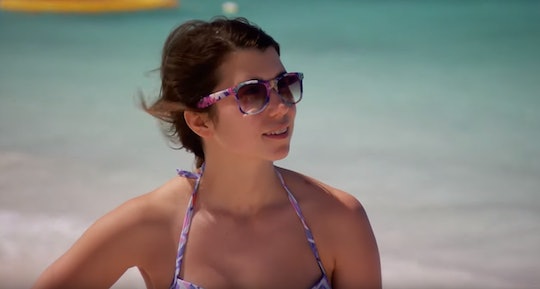 Amber Bowles and Matt Gwynne seemed like one of the most promising couples on this is season of Married at First Sight, but when Matt revealed he might leave the country for work, things became questionable. Matt is hoping to restart his international pro basketball career soon, but what is Amber’s job on Married at First Sight?

According to her Lifetime bio, Amber works as a middle school teacher, and in the Season 9 premiere, she herself revealed that she teaches eighth grade English. She also briefly talks about her past, noting that her parents got divorced after her mother fell in love with another woman. She explains that growing up with her dad and twin sister made her somewhat of a tomboy, which is why she needed help finding the right partner. "I don't wear makeup, I don't wear glitzy, glamorous stuff," Amber says in the premiere episode. "I am in a good place in my life where I really want to share my life and spend my life with someone. I am so ready to just start my forever."

The Married at First Sight experts matched Amber with Matt, a globe-trotting professional basketball player, who is looking to settle down in a committed relationship. “I’m getting married at first sight because I like to take risks,” Matt told People in an interview ahead of the season premiere. “No risk, no reward. I’m single. I’ve been a hopeless romantic my whole life, so why not?”

At their wedding, when Amber and Matt first met, they seemed happy to see each other. Amber was genuinely smitten with her new husband and couldn’t stop sneaking kisses. "I'm kissing my husband quite a bit because he's so hot,” she says right after their nuptials. “And I feel bad because like, I should not be this forward but he is so cute and like, I just can't stop."

During their honeymoon, the couple started opening up to each other, and grew emotionally and physically close. Matt told Amber about his past issues, and revealed how his parents divorce left him disconnected from his family. Towards the end of their honeymoon, he reveals that if he doesn't find success with his mobile detailing company, he may have to pursue a basketball career, which could send him to a foreign country for a substantial amount of time.

In Episode 5, over dinner, Matt asks Amber how she would feel if he ended up having to leave the country for work. “You know, hypothetically speaking, let’s say that this business venture in Charlotte doesn’t work out as expected and my agent calls me and says ‘Hey, I got this job for you to go play ball in some far away country for seven to maybe 10 months,’” Matt says. Amber responds by telling him that she can’t see how their marriage could work, and in a voice-over she admits that Matt taking an overseas contract would be a deal-breaker for their marriage.

Her reluctance is completely understandable. If she has a stable job as a teacher, doing what she loves, it would make no sense for her to leave her job to be with her husband for 10 months out of the year. And at the same time, if she stays at home, while Matt is gone for months on end, they’ll have to be in a long-distance relationship. Considering, they just met, and are just getting to know each other, it makes no sense to start a long-distance relationship. If they want this marriage to work, Matt and Amber will have sort out their logistical issues before they can move forward.