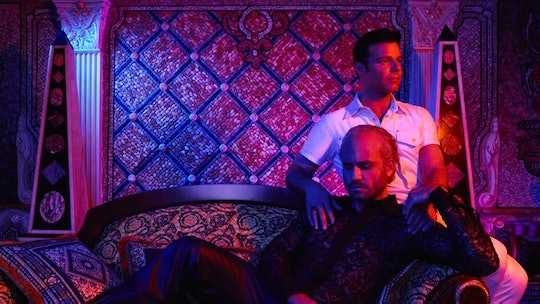 After watching the first and second seasons of Ryan Murphy's American Crime Story, I could not be more excited for the third installment, which will once again take a look at a defining moment in recent American history. So what is American Crime Story Season 3 about? Get ready to go back in time with the show once more — this time to 2006 when Hurricane Katrina ravaged the city of New Orleans, leaving homes and entire neighborhoods destroyed and almost 2,000 people dead. The government's response, lead by President George W. Bush, was widely criticized, but the show is reportedly going to focus on events that occurred closer to the ground floor.

Sarah Paulson, who as Marcia Clark stole the show on The People Vs. O.J. Simpson will return for the third installment of American Crime Story this time as Dr. Anna Pou, one of the doctors at the New Orleans hospital Memorial Medical Center. The hospital was left without power for days as temperatures rose above 100 degrees following the hurricane. The hospital's staff came up with an emergency evacuation plan and struggled to save as many people as possible when the emergency generators went out, thereby cutting off life support machines.

American Crime Story will be basing the plot off of the events as chronicled in the book Five Days at Memorial by Pulitzer Prize winning author Sheri Fink. The book reportedly takes an unflinching look at the five desperate days the hospital struggled in the aftermath of the hurricane.

The Katrina installment of American Crime Story was originally supposed to air before The Assassination Of Gianni Versace season, but production was delayed due to problems with the material. Reportedly the writers struggled to tie up the loose ends of the sprawling Katrina story, and used the Five Days at Memorial book as a means to tell a singular story. At this point I can't tell if I'm excited to see Season 3 or if I'm kind of dreading it. I can tell you that it will most likely be extremely compelling television.

In addition to Paulson, Season 3 will include some other big names as a part of its cast. Before the season was pushed back, Dennis Quaid, Annette Benning, and Matthew Broderick were all slated to appear in the series as Bush, the Louisiana governor, and FEMA director respectively. But when the story shifted to focus on the Memorial Medical Center, their roles were scrapped. At this time, it's still pretty unclear whether or not those actors will still be a part of the third season of American Crime Story, though producers reportedly were at one point still looking for roles for them to play.

Every season of American Crime Story so far has blown me away, from the nuanced portrait of the O.J. Simpson trial to Darren Criss' incredible portrayal of the serial killer Andrew Cunanan. But the Hurricane Katrina season might be the most heartbreaking of all. "The third season is set in Memorial Hospital and really looks at, sort of, the medical conditions in our country and global warming, and is this going to happen again, which it is," Ryan Murphy said at the 2018 TCA Winter Press Tour as reported by PopSugar. "And if it does, who has the right to decide who lives or dies in our country. So every different season of the show, unlike other things that we've done, is so different."

This may be the hardest version of American Crime Story to watch, but it might just turn out to be the most compelling as well. I can't wait.