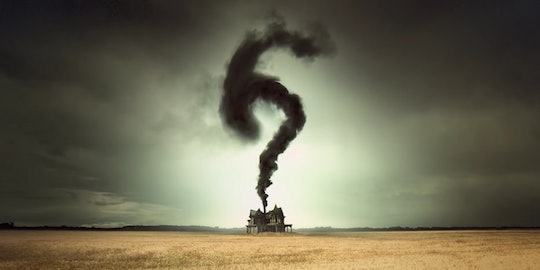 What Is 'American Horror Story: My Roanoke Nightmare'? Season 6 Has Been Revealed

The mystery of American Horror Story Season 6 has been building up for months, but within the first few moments of the premiere a theme began to present itself. Set up as the kind of reenactment-heavy TV special that the Investigation Discovery channel loves, a title was revealed. But what is American Horror Story: My Roanoke Nightmare?

The series played coy in the early moments of the episode; even when the title flashed, it didn't officially have the one word subhead. What has been playing out onscreen is a show within a show: My Roanoke Nightmare is a faux documentary depicting "true events," with a "real couple" narrating the story while two actors play out the events of their ordeal. In My Roanoke Nightmare, Matt and Shelby are a totally normal, pleasantly bland married couple who undergo a horrible night out in Los Angeles where Matt is bludgeoned and Shelby miscarries. They decide to move across the country and start fresh in a big, beautiful, old house in the middle of nowhere. How could that possibly go wrong, right?

Soon enough they begin to be tormented by mysterious forces: there's strange howling, their home ends up trashed, teeth rain from the sky, and Shelby begins to see things that might not be there.

But what does this mean for the season? Will every episode feature a different story of odd events, playing out week by week like a fictional version of a real true crime show? It's a strange, unique way of tackling the show that could work: it will allow the show to take advantage of its massive cast and keep the storytelling contained, an issue AHS has had in the past. However, that format could get old fast. Part of the fun of AHS is seeing the cast together, and watching the craziness ramp up week to week.

But if the story is different week to week, that could mean that all the promos might end up being true. With ten different stories potentially being told week to week, then all those wildly different promos might very well factor in to every episode. However, that's just conjecture and speculation. The format has yet to be officially confirmed.

One thing is for certain: AHS Season 6 is wildly different than the seasons that came before it. Whether or not My Roanoke Nightmare will continue all season long or if it is just the story of the premiere, it's certainly a big change. Only time will tell if it's one that works.