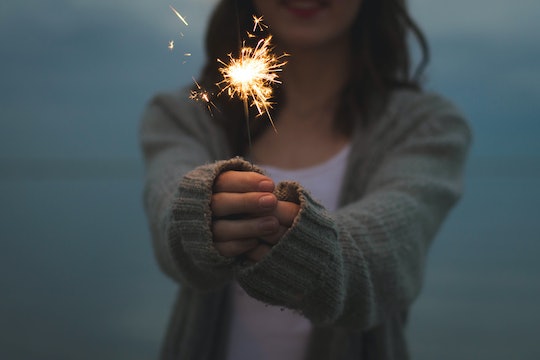 Here's What It Means To Be Anorgasmic

For many people, having an orgasm is the goal of sexual intimacy. I mean, Who doesn't want to end their day with that telltale relaxed, sleepy feeling that comes after climax? But the truth is that orgasms aren't a guarantee for women. Although it's easy to make jokes about never having an orgasm because your partner simply doesn't know what they're doing down there, for some women the issue is much more complicated. Some women may actually be incapable of having an orgasm, or anaorgasmic. What is anorgasmic? is a question asked by the 10 to 15 percent of women who suffer from this orgasm disorder, according to a sexual dysfunction study published in National Center for Biotechnology Information.

Although it can be confusing to know if you had an orgasm and they can vary in intensity, anorgasmia is defined as a "regular difficulty reaching orgasm after ample sexual stimulation, causing you personal distress," according to the Mayo Clinic. There are four different types of anorgasmia — lifelong, acquired, situational, and generalized— but very little is actually known about what causes this disorder. Is it a medical condition or one caused by various degrees of sexual anxiety and repression? According to San Francisco-based sex therapist, Vanessa Marin, the answer is complicated.

"We really don’t know if there are medical causes for anorgasmia," she told Refinery29. "I would say probably for 90 to 95 percent of women who are experiencing it, it’s because they have misinformation or a lack of information, sexual shame, they haven’t really tried that much, or there’s anxiety — that’s a huge one."

Being anorgasmic does not mean that a woman isn't sexually open, however. Women who suffer from this orgasm disorder can often be made to feel like something is wrong with them, like their body is incapable of orgasm, or like they are being disconnected during sex. Some women also cannot orgasm due to antidepression medication but are made to feel that others are pitying them constantly, according to Cosmopolitan.

If you are still having trouble, the Mayo Clinic recommended talking to your doctor about possible medications, medical diseases, psychological issues, or relationship problems that may be causing your anorgasmia. Come prepared to your appointment with a list of your symptoms, your sexual history, your medical history, and questions to ask your doctor. Your doctor may offer various lifestyle changes, therapy, or even medical treatments for anorgasmia to help your condition. Ultimately, it's up to you how to treat your condition, but continuing to enjoy your orgasm-free sex life certainly wouldn't hurt.