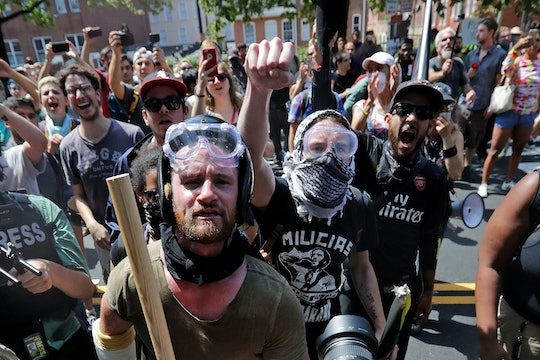 What Is Antifa & How Do These Anti-Fascist Protesters Fit Into Charlottesville?

On both Saturday and Tuesday, President Donald Trump alluded to "many sides" being responsible for the violent rally that took place in Charlottesville, Virginia, over the weekend. But, were the counter-protestors who gathered to protest the various white supremacist groups at the "Unite the Right" rally violent? It's complicated, since there were some militant far-left groups at the counter-protest among the peaceful protestors. And when the president uses the term, "alt-left" — like he did at a press conference today — he is likely referring to a group called "Antifa." But, what is Antifa anyway and how does it fit into all of this?

That, too, is a little complicated, especially for Democrats and liberals who who would like to be seen as a completely peaceful counter movement against white nationalists, Nazis, the Klu Klux Klan, and white supremacist groups.

It's a complicated backstory because Antifa does have militant roots. Antifa is an abbreviation for "anti-fascism," as it opposes fascists and other violent, bigoted political parties and movements such as the KKK or neo-Nazis. There are no headquarters or a leader, which is why it can often be hard to pin down their specific platforms and values — though various cities and states have their own chapters and may hold meetings. The group's ideals can be traced back to Nazi Germany, when the militant far-left group formed to combat the Nazi party.

Now, people who associate with Antifa are popping up more and more in public, and their means of protesting is often more aligned with anarchist methods than "mainstream" ones, like passing legislation or peacefully gathering at protest. Antifa's militant history and the fact that it stems from the far left and doesn't identify with any mainstream political party is why some right-wing pundits and Trump insinuate that they are possibly "just as bad" as white supremacists with torches. And that's debatable, depending on where you stand on the issues.

Antifa doesn't shy away from their militant roots, whether that means allegedly pulling down confederate statues, like the one in Durham, North Carolina, on Monday, or lighting fires in trash cans, like they reportedly did in D.C. in protest of Trump taking office in January. The group's militant roots also mean that when you see a picture of them with their anti-fascist banners and black face masks and hoodies, they can definitely "look like trouble," which right wing pundits are quick to point out.

The group is anti-capitalist and anti-government by nature. Members are also against any racist or sexist party, which means they vehemently oppose the Trump administration's anti-immigration policies and travel bans. Antifa is also a sometimes controversial ally of the Black Lives Matter movement, since they can show up to protest police brutality, but their militant methods often obscure the peaceful Black Lives Matter message.

Antifa is not just an American movement — it's international. You will often see Antifa referred to as the "black bloc," because they use an anarchist tactic of wearing all black to obscure their identities at protests, such as the G20 in Hamburg this summer. (Though "black bloc" members are usually ardently anarchists, whereas Antifa might draw people with a variety of things on their list to protest, so the terms aren't entirely interchangeable.)

In any case, Antifa protestors were likely in Charlottesville on Saturday to protest the white supremacist groups. In fact, they were also at the protests the day after Trump's inauguration. Remember those 200 arrests? They weren't of peaceful Women's March participants, but likely of Antifa protestors, for lighting fires or vandalizing city property, much like they do at Black Lives Matter marches, which leads to confusion from observers and pundits who don't understand the difference.

Oren Segal, the director of the Center on Extremism, an arm of the Anti-Defamation League, told Vice News this summer after the shooting at the congressional baseball practice:

When we have anti-fascist counterprotests — not that they are the same as white supremacists — that can ratchet up the violence at these events, and it means we can see people who are violent on their own be attracted to that. I hate to say it, but it feels inevitable.

Whether you believe in militant action against a government you oppose or not, it's a false equivalency to equate the far left groups fighting against fascism, neo-Nazis, the KKK, or xenophobia to people who want ethnic cleansing, like the groups that took over the University of Virginia on Friday night with torches.

Indeed, it is possible to protest from the left without being a part of Antifa. Just like all of those who march with Black Lives Matter groups. And like the victim of the Charlottesville vehicle attack or the thousands of Americans that gathered across the country for the Women's Marches in January.

Antifa is not to blame for the march on the University of Virginia or in Charlottesville this weekend, but they were definitely there, and will likely continue to show up to white supremacist rallies to counter them. And that's why it would be prudent for leaders to denounce those gatherings and try to cut the violence off at its roots.