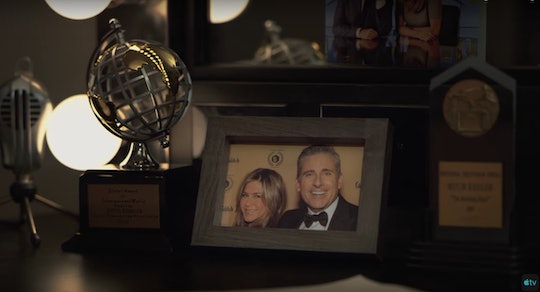 Apple has been releasing waves of news about something called Apple TV+ for years, and the company finally released a teaser trailer for the streamer's first show: The Morning Show. But somehow Apple TV+ still feels like a mystery. So, what is Apple TV+? Let me tell you everything I know.

Apple TV+ is the new "original video subscription service" from Apple that will feature "exclusive original shows, movies, and documentaries," according to a press release released in March. The service will debut in the fall and is definitely not going to be free, but Apple is waiting until fall to release details about the price. I know subscribers will be treated to "inspiring and authentic stories with emotional depth and compelling characters from all walks of life, ad-free and on demand," thanks to the press release. Ad-free is usually for me, but to win me over I need to know the content is going to be worth spending a little coin.

Luckily, The Morning Show, apparently the first original program from the subscription service, gets a little help from some serious star power. Reese Witherspoon, Jennifer Aniston, and Steve Carell all star in the series — which focuses on a morning news show. It's an "inside look at the lives of the people who help America wake up in the morning, exploring the unique challenges faced by the women (and men) who carry out this daily televised ritual," The Hollywood Reporter says.

There's little to be gleaned about the plot of the show from the teaser, unfortunately. The camera slowly pans over the show's darkened set, with just snippets of dialogue — without context — from Aniston, Witherspoon, and Carrell's characters. It's all very intense. I'm a Witherspoon stan for life so I won't be missing The Morning Show. But one show can't carry a whole subscription network. So, what more will Apple TV+ offer?

In the official statement, Eddy Cue, Apple’s senior vice president of Internet Software and Services said, “We’re honored that the absolute best lineup of storytellers in the world — both in front of and behind the camera — are coming to Apple TV+." So far, that lineup also includes Oprah Winfrey, Steven Spielberg, M. Night Shyamalan, J.J. Abrams, and Jason Momoa, just to name a few. Hailee Steinfeld will star in a half-hour comedy about the life of 19th century poet Emily Dickinson. I'll have to see that one to believe it.

Apple has also announced a musical show about a struggling songwriter in New York City to be composed and executive produced by none other than Sara Bareilles. She promoted a casting call for the lead role of Bess on social media, so it appears the subscription network is looking to create stars, too.

Apple has more than 20 scripted series across different genres in varying stages of production, according to THR, so it's highly possible that Apple may be the next go-to spot for can't miss TV.

You can watch the first wave of Apple TV+ programming beginning in fall 2019.