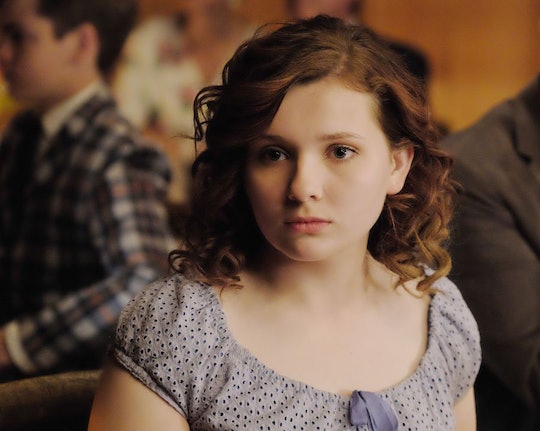 Baby's Real Name On 'Dirty Dancing' May Surprise You

The Dirty Dancing remake is almost upon us and whether you're excited or cautiously optimistic, it's an event you don't want to miss. The remake stars Abigail Breslin as protagonist Baby who goes to a summer resort with her family and meets bad boy dance instructor Johnny Castle, played by newcomer Colt Prattes. Though everyone refers to her as Baby in the film, you may be wondering what is Baby's real name on Dirty Dancing?

It turns out her real name is actually Frances. It's never really said why she's called Baby in the first place, but one can assume it's because she's the "baby" of the family. She's the youngest of two daughters — her sister Lisa, played by Sarah Hyland in the remake, being the eldest. Almost no one remember's Baby isn't the character's real name, especially when one of the most iconic lines of the film is, "Nobody puts Baby in a corner."

Regardless of what her real name is, Baby has become one of the most well known characters in film history and the nickname was played on a lot in the film, especially with the music choices. Songs like "Hey Baby" and "Be My Baby" worked perfectly for the movie, which is why it's not at all surprising they were remade for the television remake as well.

The television remake will also include some new music since, unlike the original film, the remake is actually a musical. The soundtrack incorporates a mix of songs by the cast and other musical artists like Lady Antebellum, Seal, Calum Scott, and Bea Miller. You can find the entire soundtrack on iTunes and Spotify now.

Besides the music, the remake also has a pretty great cast. Aside from Breslin, Prattes, and Hyland, the remake includes the likes of Debra Messing and Bruce Greenwood as Baby's parents and Nicole Scherzinger as Penny Rivera (Penny Johnson in the original), who is Johnny's dance partner prior to meeting Baby. Katey Sagal, Billy Dee Williams, Trevor Einhorn, Beau Casper Smart, and Shane Harper also have roles in the reboot as well.

Unfortunately, it doesn't look like Jennifer Grey — who played Baby in the original — will make a surprise appearance in the remake. Patrick Swayze, who played the original Johnny Castle, tragically died in 2009 after battling pancreatic cancer.

This August marks the 30th anniversary of this timeless film, which is why it's the perfect time for a remake. You can see the Dirty Dancing musical event when it airs on Wednesday, May 24 at 8 p.m. ET on ABC.