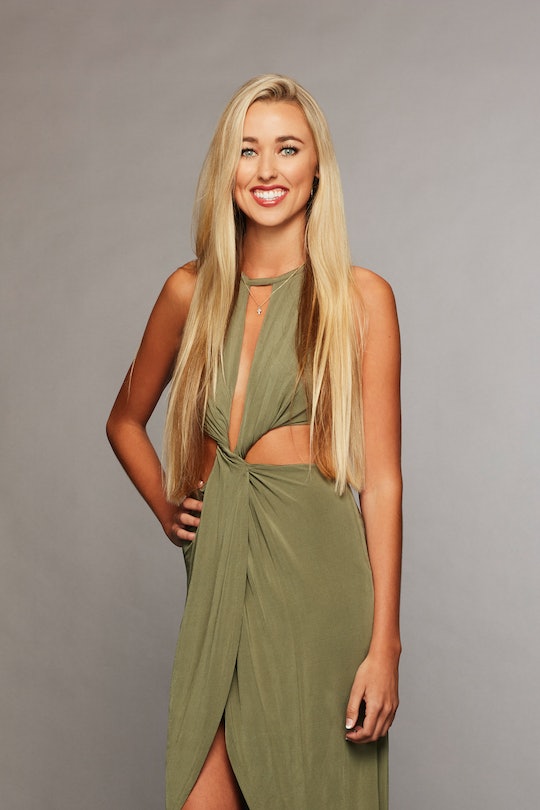 This Season 23 'Bachelor' Contestant Has The Best "Job" Title, TBH

The most talked about headline with regards to the newest Bachelor, Colton Underwood, probably has something to do with the former NFL player's virginity. Season 23 of the ABC franchise aims to put Colton and his values front and center but Colton won't be the only one on the show who hasn't yet experienced some of the more intimate aspects of romance. Such is the case with California-based Heather who's "profession" is reportedly "never been kissed." But, what is Bachelor contestant Heather's real job? As in, how does she make the dollar bills?

During a Facebook livestream where Bachelor Nation host Chris Harrison officially introduced all the lovely ladies competing for Colton's heart, the most that was said of Heather is that she's never been kissed and with that it's insinuated she is a fellow virgin. There's no mention of what she does for a living, though you can't pay the water bill with the title "Never Been Kissed." Her ABC bio says Heather was "born and raised in San Diego." A true "thrill-seeker" who'd probably prefer the likes of river-rafting, skydiving, and bungee jumping to a quiet night in. And don't let the whole no kissing situation fool you. There's more to the 22-year-old. For one, she has a fear of snakes (who doesn't?) which might help her weed through the snarky contestants to nab Colton's heart. Her beloved pet, Kitty, is an actual kitty. And though there's no official word on what she does for a living, she'd be a food critic if the world was her metaphorical oyster.

It's not the first time a Bachelor contestant's career title has been at the center of America's collective "what the?" I mean seriously — some of these "jobs" are just plain weird (and non-existent in the real world that is not reality TV). All Bachelor Nation fanatics probably remember Jonathan Treece from Rachel Lindsay's season with the job title "Tickle Monster." Then, there's Lucas Yancey from the same season who's also known as the "Whaboom" dude. Season 20 featured "Chicken Enthusiast," Tiara Soleim vying for Bachelor, Ben Higgins's heart. She competed against twins, Emily and Haley Ferguson whose primary occupation was "twinning."

You'd think that'd be enough but every season, the show's titles get wackier to make sure you're paying attention. Juan Pablo (Season 18) had contestant, Kelly Travis, listed simply as "Dog Lover," (um, me too) and Lucy Aragon as a "Free Spirit." And finally, on JoJo Fletcher's Season (12), there was both James Spadafore known as "Bachelor Superfan" and Daniel Maguire with the simple title of "Canadian," though he's actually a personal trainer. Whoever's put in charge of writing and editing career titles is my personal hero.

Season 23 of The Bachelor has its share of beauty pageant contestants, account executives, and medical professionals so Colton will have his hands full. He first came onto the scene in Season 14 of The Bachelorette with Becca Kufrin as the lead. And though it didn't work out between them, and also didn't work out between himself and former flame, Tia Booth on Bachelor in Paradise, something tells me Colton will be just fine — virginity and all. So what if Heather's never been kissed? The real question is, what does she do to keep the electricity on? Your guess is as good as mine, friends. I guess I'll tune in to find out and so should you.