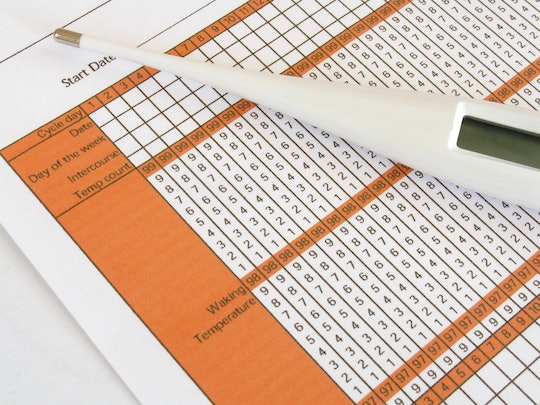 What Is Basal Body Temperature? How 3 Words Can Dictate Your Pregnancy

There are many reasons to track your body’s ovulation schedule. Maybe you’re trying to get pregnant, and so you want to know the best days to get busy. Or maybe the opposite is true — you want to know which days to avoid sex at all costs. Or maybe you’re in that “We’re not trying to get pregnant, but we’re not not trying, either” phase, and the idea of natural family planning is more attractive than traditional birth control options. Whatever the reason, you probably have some questions: How do you get started? What is basal body temperature? And how can you track your monthly cycle in a reliable way?

According to BabyCenter, basal body temperature is simply your morning body temperature before you do absolutely anything — eating, drinking, moving, speaking. Essentially, it’s your base body temperature. So why does it matter when you want to have a baby? Well, ovulation can cause a slight spike in body temperature, indicating that your body is in prime baby-making shape. By tracking your BBT each day, you are able to predict when you’re most fertile and increase your chances of conception. But tracking BBT isn’t only used for baby making. Many women monitor their BBT as a form of all-natural birth control.

Chaunie Brusie, a mom of four and former labor and delivery nurse, has tracked her basal body temperature for the last few years as an alternative birth control method. “I really hate birth control. I am just so uncomfortable with the idea of anything in my body like that,” Brusie says, saying she researched options like crazy after her last baby was born, even making an appointment to have the copper Paraguard IUD inserted. But she couldn’t go through with it. For one, she hated the idea that it could cause inflammation. Secondly, she still wanted the option to have children without having to go through another procedure.

So every morning before she gets out of bed, Brusie takes her temperature with a fertility monitor, which is an all-in-one temperature and ovulation tracker for natural family planning. If you don’t want to invest in a basal thermometer or ovulation kit, you can simply track your morning temperature with an ordinary digital oral thermometer and chart your ovulation on graph paper. Whatever method you choose, it’s important to track the temperature increase on paper, as it might be too slight to notice without charting — like less than a ½ degree. This will also allow you to see if any patterns emerge, making it easier to track optimal fertility in future months.

“It’s helped a lot though because apparently I ovulate way earlier than I thought — like literally the day after my period ends,” Brusie says. “But even then you never know because [my fourth daughter] was conceived late, like day 17 or 18.”

That being said, it’s important to note that tracking your basal body temperature is the least effective method of birth control. According to Mayo Clinic, 24 percent of women who use fertility awareness-based methods to prevent pregnancy — such as the basal body temperature method — for one year will get pregnant. So keep that in mind when you’re determining just how prepared you are for a possible pregnancy.