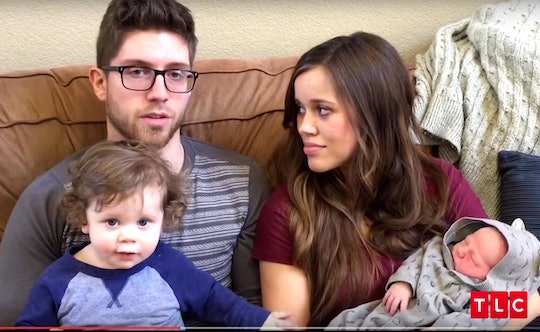 The Duggar family has been in the spotlight again this month, as Jessa Duggar Seewald, one of the older Duggar siblings, announced the birth of her second child, Henry, with husband Ben Seewald. In addition to the other questions dedicated fans may have about the newest member of the Duggar-Seewald family, some fans may also be wondering: What is Ben Seewald's net worth? As it turns out, his financial situation is inextricably linked to his wife's.

Jessa and Ben first met when Ben was working on the Duggar family's property in Arkansas, when he was still a teenager, according to Celebrity Toob. They married in 2014, when Ben was 18 and Jessa was 21, and welcomed their first son, Spurgeon, in 2015. It was during these first years of the Seewald's marriage that 19 Kids and Counting, the TLC reality show that launched the family to fame, was cancelled following several scandals surrounding Jessa's brother Josh, one of the Duggar siblings. (No legal charges were ever filed.)

In the wake of the reality show's cancellation, an inordinate amount of media attention was focused on the Duggar family's net worth. After all, this is a family that has a lot of mouths to feed, so curiosity was rampant. According to Hollywood Take, the family's net worth in 2015, before the show was cancelled, was reportedly around $3.5 million.

The good news for the Duggars is that TLC launched a new reality show in 2016, Jill and Jessa: Counting On, featuring Jessa and her older sister Jill Duggar Dillard. According to Celebrity Toob, Jessa's net worth is reportedly around $400,000, a figure that's presumably based on income from her reality television series.

As for Ben, who is now 21, his income is the same as Jessa's; He doesn't currently have a job outside of starring in Counting On and raising his kids with wife Jessa. And what more could we expect, really, from a 21-year-old? In an interview out this week with People, Jessa says that she feeds the babies while Ben is in charge of changing their diapers. "He’s gotten so good he could do it with his eyes closed!" she told People. As for Ben's job prospects outside of diaper-changing duties (which, frankly, can be significant), it appears that he might be dipping his toes into preaching. According to The Hollywood Gossip, in June, Seewald will be preaching at the Evangelism Reformation Conference in Hurst, Texas.

Judging by Seewald's social media accounts, he indeed has a deep interest in both theology and politics. He quotes scripture frequently, and appears to enjoy reading. In his most recent Instagram post, he shared the cover image of a book, along with the caption, "This evening has been blessed. Gorgeous weather...steaming chamomile tea...a compelling book...praise Jesus for giving this day."

Seewald is a young man with a number of passions that he'll surely explore in the coming years. In the meantime, he has plenty on his tray with two young sons to raise.