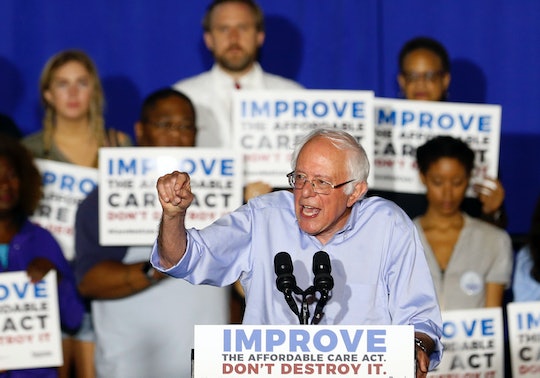 Here's Why Bernie Sanders' "Medicare For All" Won't Be Happening

Vermont Sen. Bernie Sanders is back with a new plan for universal health care, and his plan has gained the support quite a few colleagues. There are still a lot of unanswered questions to be addressed when the bill is officially introduced on Wednesday afternoon, but let's start with the first: What is Bernie Sanders Medicare For All bill? According to Vox, it would shift all Americans to a single-payer, government-run health care system, with no deductibles or copayments for doctor visits. It would cover primary care and specialist visits, hospital stays, vision, dental, mental health, and substance abuse treatment, and reproductive care, including abortion.

That's not only more comprehensive than the current Medicare model, it's better than any U.S. employer-sponsored insurance plan, and it even beats Canada's universal health care system. Under the new bill, current Medicare recipients would immediately gain dental, vision, and hearing aid coverage, according to CNN, and the age of eligibility would drop from 65 to 55. Children under 18 would also qualify. Over the next three years, the minimum eligibility age for adults would drop progressively until all Americans were covered, and employers would no longer be allowed to offer competing plans. The plan would not effect Veterans Affairs health care or Indian Health Services.

One thing that Sanders hasn't shared yet is how all of this would be financed. Sanders' last universal health care plan, which was part of his presidential campaign platform, was estimated to cost $1.4 trillion, according to CNN. It's not identical to the Medicare for All Act of 2017, but it's all we have to go on for now, since the Congressional Budget Office hasn't had a chance to score the new plan. The 2016 plan would have been paid for by a 2.2 percent tax increase for all Americans, a 6.2 percent increase for employers, and of course, more taxes for rich people.

According to the Kaiser Family Foundation, more than half of Americans support federally funded universal health coverage — 53 percent of poll respondents said they favored a "single-payer" plan, but when asked about "Medicare for all," that number rose to 57 percent, which explains the name of the bill. Sanders believes that even with taxes going up, Americans would actually save money in the end, because the plan would drive health care costs down, since all providers would be negotiating with a single entity rather than hundreds of different insurance companies, which each set different reimbursement rates. However, the plan wouldn't help with drug prices; CNN reported that consumers could end up paying up to $250 out-of-pocket for prescriptions.

According to the Washington Post, the average American pays $11,365 per year in taxes, while Canadians pay $14,693, but Americans pay twice as much for health care than Canadians. The down side is that Canadians wait much longer for their health care. A 2016 Commonwealth Fund survey of 11 countries ranked them in last place, with one in five Canadians reporting week-long wait (or more) to see a primary care physician, and half waited more than four weeks to see a specialist. There's no word yet if Sanders has a solution to that problem, but first and foremost is the funding issue. An aversion to tax increases is what led to a failed attempt at single-payer health care in Sanders' home state of Vermont in 2014, according to Politico.

"Rather than give a detailed proposal about how we’re going to raise $3 trillion a year, we’d rather give the American people options," Sanders told the Post. He pointed to a lack of available research data as the reason he had no definitive funding plan set in place. But even with the support of 15 Democratic senators, it doesn't really matter. Under a Republican-led Congress, Sanders' plan is dead in the water. But at least it's a fun thought experiment.