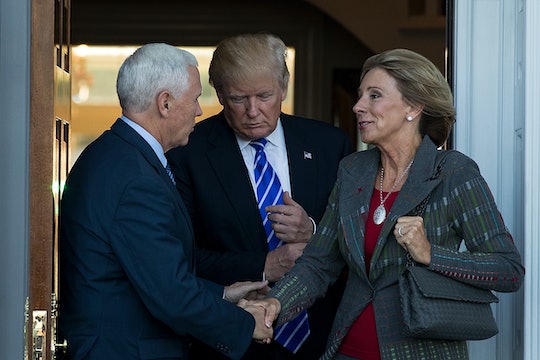 What Is Betsy DeVos' Net Worth? The Billionaire Is Trump's Secretary of Education

Before president-elect Donald Trump got elected he made promises to "drain the swamp" and pick unconventional candidates for his Cabinet. While the majority of those picks are predictable — much like Trump himself many do not have the experience of seasoned politicians — like Betsy Devos, Trump's pick for secretary of education. But where DeVos is lacking in holding political office, she picks up in her business experience — much like Trump, DeVos' family has made quite the name for themselves and has the money to show it. People will probably be dying to know — what is Betsy DeVos' net worth? And will soon find out that it might be a little more than her soon-to-be bosses.

DeVos married into a family with billions. But her last name is not synonymous with bags of money; she is not the first person that would come to anyone's mind when they think of billionaires in the United States. DeVos was born and raised in Michigan, according to Mic, where she graduated from Calvin College and received a bachelor's degree in political science and business administration. She went on to marry Dick DeVos, who comes from a family of extreme wealth, according to Forbes — Dick's father, Richard DeVos, is worth an estimated $5.1 billion dollars — which is a fortune that Dick is set to inherit.

To put the DeVos' fortune into comparison, Trump is reportedly worth $3.7 billion, according to Forbes, and is only the 156th richest person in the world. The DeVos family's net worth certainly rivals her bosses — and Betsy, who has a portion of that wealth, will soon be our next secretary of education.