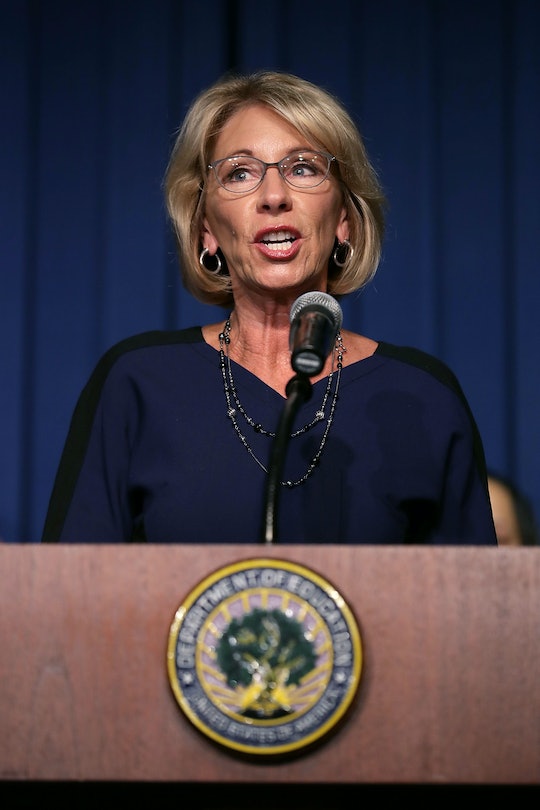 Will Betsy DeVos Stick To Her Salary Promise?

On Tuesday, Betsy DeVos was confirmed by the Senate as the next secretary of education, after Vice President Mike Pence used his authority as Senate president to cast a tie-breaker ballot in her favor. But while the new position alone is enough to put a target on her back, the education secretary position is also a far cry from DeVos previous job as chair of her own investment firm, which she ran with her husband. While it is known that DeVos comes from money, many are wondering what DeVos' salary is, now that she's been sworn in as secretary of education, and whether it's a step up or down from her previous paycheck.

DeVos is a known billionaire — having both come from money and having married into money, according to Cosmopolitan. DeVos' father, Edgar Prince, was a "billionaire Michigan industrialist" and DeVos' father-in-law, Dick DeVos Sr. is the co-founder of the Amway Corporation. Dick DeVos Sr.'s wealth is so impressive, it once earned him the 88th spot on the Forbes 400 wealthiest list. As it turns out, DeVos shares her wealth too — with a few fortunate friends. According to The Huffington Post, DeVos has personally donated $115,000 to Republican Senators since 1980. She's clearly not living pay check to pay check or struggling in any sense.

When asked about her financial conflict of interests in educational for-profit companies, DeVos told the Senate that she is "committed to ensuring that she has no conflicts" and would only take a salary of $1 to "be official."

But if DeVos isn't really taking home a salary of $1, then the answer to what her actual pay as the secretary of education might be is a little murky. According to the Internet Public Library, Cabinet members do not have fixed salaries and they increase their pay annually by small adjustments. As the Secretary of Education, DeVos is a Level 1 member of the executive branch. According to the United States Office of Personnel Management, the "basic pay" for a Level 1 executive employee in 2017 is $207,800. This is a pretty big contrast to what a Level 1 executive employee would have been making more than 10 years ago. According to a 2005 CRS Report for Congress, DeVos would have made $180,100 in 2005 during the George W. Bush administration.

Of course, just because DeVos is entitled to this six-figure salary doesn't mean that she's taking any of it — especially if she follows through on what she told those at her confirmation hearing, and takes home her promised $1 salary.

DeVos has the potential to earn a good bit of money to add to her family's wealth, now that she's education secretary — but whatever happens, it's clear that she'll still be taking a major pay-cut from where she was before.

More Like This
Sarah Michelle Gellar Is Facing A Terrifying Parenting Milestone: Sleep Away Camp
Lauren Conrad Shares Experience With "Lifesaving Reproductive Care" After Ectopic Pregnancy
The FDA Is Warning Parents To Not Use Baby Neck Floats After One Infant Died
Ketanji Brown Jackson Spoke Directly To Her Daughters In Her Powerful Opening Statement