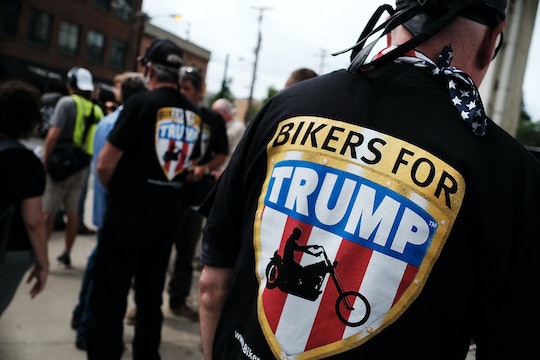 What You Should Know About Trump's Biker Fans

There are many Democratic legislators boycotting the inauguration ceremony this Friday, but there are just as many groups of people planning a long-weekend to celebrate the swearing in ceremony. As thousands of women and allies are also planning to march Saturday in protest of the new administration, it's scary to think that, as a woman who plans to walk, there may be groups of people who could want to disrupt any peaceful protest for the worse. One such group to keep an eye on is Bikers For Trump. Lest you have images of Hells Angels in your mind, it's better that everyone gets to better know the Bikers For Trump, who plan on attending the Women's March on Washington, before hating on them immediately.

Bikers have a bad reputation — in the name of full disclosure, my family has some Harley Davidson collectors and weekend-ride warriors. Often, images of violence, racism, or even just Jax Tellar dance in one's head when it comes to men on motorcycles. But bikers aren't inherently terrible and for sure, given American counter-terrorism policies and the "War On Drugs," they have no more power than random street gangs when it comes to "doing bad things."

But despite their lack of power when it comes to being badass, merely saying the word "bikers" conjures up images of a lot of white men on Harley Davidson bikes cruising on a mission for many Americans.

In all fairness, those fears are valid, because that's what we see on TV — scary biker gangs roughing people up on the regular and menacing fragile citizens. What's odd is that the president-elect seems to want to perpetuate this damaging stereotype of bikers being violent and abusive and power hungry. There's no reason for that.

The president-elect has already cheered the impending arrival of the Bikers For Trump — a loose, social media organized group of men and women who have motorcycles, support Trump, and are probably going to D.C. for the inauguration — ahead of inauguration weekend. But despite that ominous excitement, it's not like (cue scary story voice) "the bikers are coming." It's more just like, "Hey, those bikers are coming. Hope they can find parking spaces."

All that being said, let's forget about the myth of the scary biker and focus on what's really important here: Bikers For Trump were the same ones who wanted to patrol polling places in November for "voter fraud," thought they would help secure Cleveland for the Republican National Convention, and are supposedly going to protect Trump from some 100,000 women peacefully marching in D.C., as if our own federal security services weren't good enough to maintain order.

Here's a tip: They don't need to do any of that, and they certainly don't need to "protect" Trump from protesters this weekend (or any weekend, really). America has security and military force down to a science and it's sort of offensive that the Bikers For Trump think that their own "militia" will be better than what America already has. This is not a Shonda Rhimes show (we hope). Come on.

Now, the Bikers For Trump think they are going to patrol the Capitol over the weekend. Again, they don't need to do that, as, if nothing else, it'll probably just prompt people who do subscribe to the "scary biker" myth to become agitated and worried. And women looking for a peaceful Saturday march who don't buy into that myth will probably still be frustrated by their presence too — because the only reason they seem to have in coming is to counter-protest against women concerned for their futures. Which seems pointless.

Long story short? Don't be scared of the bikers. But be concerned that they feel our law enforcement and federal officers aren't good at their jobs, and that women need to be confronted in what is, ultimately, an impassioned, meaningful demonstration.