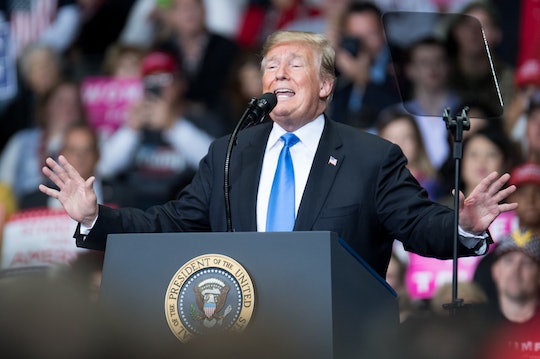 The political landscape over the past few years has been a whirlwind, as President Donald Trump continues to pass and propose increasingly controversial legislation. In a recent interview, Trump announced a new plan to end birthright citizenship, which would target U.S born child of undocumented immigrants, having devastating impact. But, what exactly is birthright citizenship?

Trump's new plan came during an interview with Axios released Tuesday, Oct. 30. As outlined by Axios, Trump intends to sign an executive order to remove the right of citizenship for babies of non-citizens and unauthorized immigrants born on U.S. soil. It is a move that will pose challenging for Trump, but that doesn't erase the immediate concern.

This plan will likely face pushback on the grounds of being unconstitutional. As outlined by CNN, the U.S. Constitution was amended 150 years ago to include the words: "All persons born or naturalized in the United States and subject to the jurisdiction thereof, are citizens of the United States."

Trump is firm that he can accomplish his goal on his own with an executive order, telling Axios, "It was always told to me that you needed a constitutional amendment. Guess what? You don't."

Birthright citizenship may be an unfamiliar concept for those who aren't directly impacted by it, but now it's important to be aware of what exactly Trump is trying to end. As outlined by U.S. Legal, birthright citizenship refers to "the citizenship granted to a person by virtue of the circumstances of [their] birth,"

The basis of birthright citizenship comes from the 14th Amendment, which was originally added to the U.S. Constitution in 1868 to ensure formerly enslaved people were granted citizenship. The amendment clauses also state, as outlined by The History Channel, that "no state shall make or enforce any law which shall abridge the privileges or immunities of citizens of the United States" and "nor shall any State deprive any person of life, liberty, or property without due process of law."

Precedence of birthright citizenship when it comes to children of immigrants was upheld by the Supreme Court in 1898 in the case of United States v. Wong Kim Ark. The case concerned Wong Kim Ark, born in the United States to parents of Chinese descent, as outlined by Cornell Law School.

During this time, the Chinese Exclusion Act was in effect, passed by Congress in 1882, as outlined by The Washington Post. The denial of Wong's citizenship was a test case that is eerily reminiscent of the landscape today. Wong, however, won.

The majority opinion of the Supreme Court, as outlined by Cornell Law School, held:

Although not well known by the public, this Supreme Court case has become incredibly important and influential. It is the rulings of Wong Kim Ark's case that Trump is seeking to overturn.

The announcement of Trump's plan comes only a day after he vowed to construct tent cities to house migrants traveling through Mexico to the U.S. Southern Border, as reported by CNN. Trump's administration announced their deployment of 5,200 troops to protect the frontier as the "caravan" advances.

Many have spoken out opposing Trump's plan so far. For instance, Omar Jadwat, the director of the ACLU's Immigrants' Rights Project, told HuffPost on Tuesday:

The president cannot erase the Constitution with an executive order and the 14th Amendment's citizenship guarantee is clear. This is a transparent and blatantly unconstitutional attempt to sow division and fan the flames of anti-immigrant hatred in the days ahead of the midterms.

At this point, it's unknown when Trump will try to put this plan into action. However, the threat of it is a clear escalation on Trump's part when it comes to anti-immigrant rhetoric. Even if this plan is blocked, it is still a concern for all.