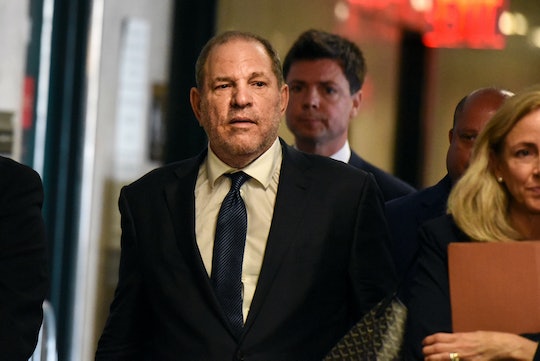 The Hulu documentary Untouchable delves into the deluge of sexual assault allegations that have been leveled against Hollywood producer Harvey Weinstein over the last several years. Among its many upsetting revelations is Weinstein's reported use of Black Cube to discredit people he had allegedly harassed or assaulted. But what is Black Cube?

Black Cube is "a select group of veterans from the Israeli elite intelligence units that specialises in tailored solutions to complex business and litigation challenges," according to their website. It is described as a "creative intelligence" firm that uses "out-of-the-box thinking" to find solutions to whatever its clients need. The site boasts of Black Cube's innovative methods and the vast amount of information the firm is privy to online. The company is also used by the Mossad, according to Us Weekly.

Untouchable has two sources who allege that Weinstein used Black Cube to help suppress the growing allegations against him. One is journalist Ronan Farrow, whose in-depth piece on Weinstein for The New Yorker helped publicize the allegations; the other is an anonymous investigator who allegedly has the original contract between Black Cube and Weinstein's law firm. It states what Weinstein allegedly had the intelligence company do.

In the documentary, the private intelligence source appears only in silhouette with their face blurred. "The primary objective of the project is to identify the entities behind the negative campaign against the Client and support the Client's efforts to put a stop to it," they read aloud from the alleged contract. Then they stated that Weinstein allegedly provided Black Cube with a list of targets: people who he believed were sharing negative stories about him with the press. One target whom Black Cube allegedly had a profile on, according to the documentary, was actress Rosanna Arquette.

Weinstein was allegedly pouring a lot of money into stopping people from speaking out against him, per Farrow; the Black Cube contract alone would have cost "hundreds of thousands of dollars." Though rumors about Weinstein's behavior had run rampant from the beginning of his career, he seemingly put intense effort into keeping anything more concrete from getting out. Reporters were allegedly targeted as well. Farrow claimed that he received "strange and threatening calls," as well as legal threats; also claiming he was even followed and had to move out of his home.

Farrow stated that it appeared one method allegedly used by Weinstein and intelligence firms was to find photos of Weinstein looking friendly with women he had allegedly assaulted. This was supposed to make it look like Weinstein and the women were on good terms, though in the documentary Farrow and actress Paz de la Huerta (who has alleged that she was raped by Weinstein) claimed that it was common for victims of trauma to give the appearance that nothing was wrong. Just because their pain was not for public consumption did not mean that it didn't exist. "You put on a happy face, but inside you're dying," de la Huerta said.

Weinstein was arrested in 2018 on charges of first-degree rape and third degree rape, one count of criminal sexual act in the first degree, and two charges of predatory sexual assault, as reported by NBC News. He has pleaded not guilty to all charges and is currently awaiting trial, which is set for January 2020. As of September 2018, federal prosecutors were investigating Weinstein's ties to Black Cube, according to The New York Times; it's unclear at the moment how and if that will factor into his upcoming trial.

Untouchable is currently available to stream on Hulu.