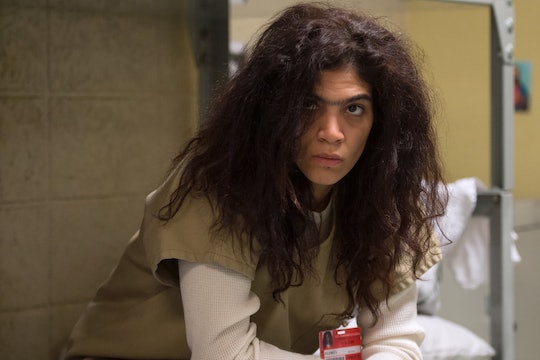 What Is Blanca's Backstory On 'Orange Is The New Black'? She Had An Strange Past Dynamic

It all started with Blanca — sans brow, sans Season 4 smell, etc. — working as a caregiver for an old woman. The woman is, in a word, demanding and often abrasive. It seems that Blanca feels trapped in the role with little control over her own life, which comes into play later on in the season and also in her backstory. In the flashback, Blanca meets and flirts with the landscaper, who mentions how he used to be a bad boy. Blanca, ironically enough, says she's never been much of a daredevil and wishes she would have done more stuff "on the edge" when she was younger. It isn't such a rare opinion, but what she does next definitely isn't as common.

After learning that her boss/ the woman she is helping has fired the landscaper, it seems Blanca slightly rebels. She ends up having sex with the landscaper in the room where the old lady is sleeping to perhaps live more on the edge. The old woman wakes up to the noise and commotion, and being immobile, is left to just stay in bed while the two lovers do their thing.

As for Season 4 Blanca, she goes through quite the transformation in Litchfield. She stopped showering and has managed to use it to her advantage — no strip search or pat down by the gross guards when you smell like rotting food.

Interestingly enough, though, it seems her relationship with the older woman might have ignited some power in Blanca, because the Blanca we see stands up (literally) to authority. While her public display of affection — if it can even be called that — is extreme, after it occurred, it seemed like the Blanca was calling the shots with her boss, and not the other way around, eventually shaping the Blanca we know today.