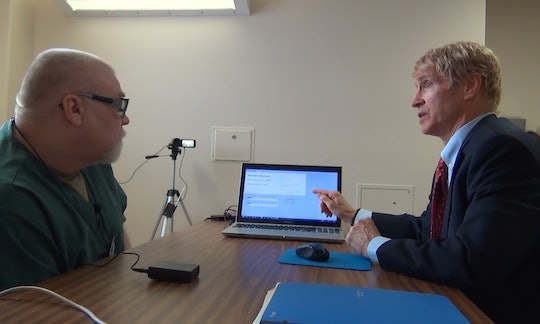 This 'Making A Murderer' Technology *Could* Help Steven Avery's Case

Season 2 of Making a Murderer arrived three years after Steven Avery and Brenden Dassey became household names. Both were convicted for the 2007 murder of Theresa Halbach, and both are serving their time, though both also maintain their innocence to this day. They each have new legal council, and Avery's new council is bringing on new experts to back up his appeals case. Avery's attorney, Kathleen Zellner, believes brain fingerprinting may be the key to Avery's release. So what is brain fingerprinting exactly? It's time to get your science on.

The new season of Making a Murderer explores what happened after the convictions and this includes how each team continues to fight for Avery and Dassey's freedom. The inventor of brain fingerprinting (and who is shown on the docuseries), Larry Farwell, described the polygraph-like technique on his website as "a new paradigm in Criminal Justice and Counterterrorism," adding that brain fingerprinting can show "definitively that innocent suspects lack this record of the crime stored in their brains." The use of something like this has been widely debated because accuracy, some argue, may not be spot on. So, if Farwell's technique works properly, Avery's brain should remember details of the crime, and if it doesn't, he's innocent. Zellner furthermore argues in the show that Avery believed the test would definitively prove his guilt or innocence with perfect accuracy — and he jumped at the opportunity to take it.

The Verge explained brain fingerprinting as something like a lie-detector test. The way it works is by gathering an EEG reading of your brain activity. Your responses are tracked when confronted by specific facts and/or images. The results are determined by whether your brain stored the details. The whole point is to see if there's the presence of something called the P300 response which, as The Verge reported, is a "distinctive surge of electrical activity in the EEG wave when a person saw something familiar, usually arriving 300 milliseconds after the object was revealed."

In simpler terms, when brain fingerprinting is used during an interrogation, there may be a series of detailed questions asked about the crime — like how the victim died. If the suspect knows exactly what happened, it'll trigger that P300 response. Unlike a traditional polygraph lie-detector test that measures sweat, nerves, etc., brain fingerprinting is brain-centric.

In the second episode of Making a Murderer: Part Two, the technology is introduced to Avery by Farwell. Conductive material is attached to the person's scalp (to form a circuit). The wave reading shows what's going on in the brain. By watching the reading as suspects are shown details of the crime, experts are able to pick out disturbances which may be a subconscious reveal or confession of sorts. In the episode, Avery is shown words specific to Halbach's murder on a screen. "We present three different types of stimuli," Farwell says. "Things we know he knows, things that are irrelevant and then probes, where we will get the response only if he knows it." The end result? Farwell's conclusion was that Avery didn't kill Halbach. Whether you agree or disagree with the method or conclusion, Farwell's website claims "100 percent of determinations have been correct."

If you think it's clearcut, hold on a sec. There have been numerous qualified scientists refute the validity of the test's results. Jane Moriarty, a chaired professor at Duquesne's School of Law told The Verge brain fingerprinting technology isn't courtroom-ready. "There's not enough testing behind it to say, yes, we should use this as evidence to convict people." She's not the only one who's hesitant. Ewout Meijer, a researcher who wrote for Cognitive Neurodynamics in 2012 about brain fingerprinting, told Bustle, "​There is nothing intrinsically wrong with [brain fingerprinting], but Farwell is overselling it with his claims of (near) perfect accuracy." In response, Farwell stated, the authors "did not cite any data that contradict" the three hypotheses presented in his original paper, "nor did they propose alternative hypotheses or standards." In other words, he stands behind his technology and the claims he has made about its accuracy.

Brain fingerprinting is still a huge unknown in terms of whether or not it'll play into Zellner's plan for Avery, or any other court case as of yet. In any event, it'll be interesting to see the way this season plays out.