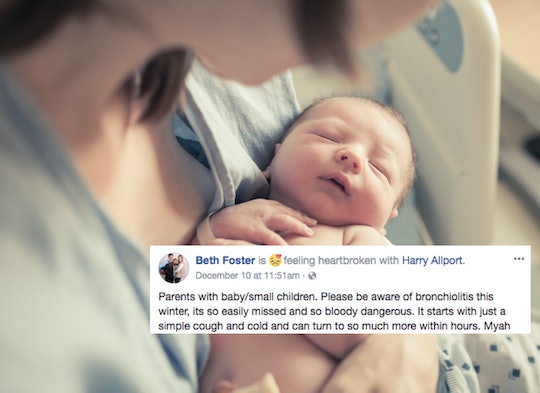 As if flu season weren't bad enough, parents have a whole other seasonal illness to watch for. Coming with common symptoms like coughing and fever, bronchiolitis can go dangerously undiagnosed. For this reason and others, this mom's warning about bronchiolitis provides an important warning to other parents about the dangers that can hide behind a cough.

Mom Beth Foster posted her own harrowing account of her daughter Myah's experience with bronchiolitis to her Facebook page. She explained in the post that Myah began with a bad cough and "normal cold symptoms," that escalated to coughing fits that "turned [her] purple through lack of breath." She wrote:

Myah was using muscles in her tummy to help her to breathe that she shouldn’t even be using to breathe. I’ve never seen a baby’s tummy pumping so fast fighting for the breaths, and I’ve never been so scared.

Bronchiolitis is a common illness among infants and young children that impacts their respiratory tract. It is the leading cause of hospitalization in infants and young children, according to UpToDate. An infection affects the baby's airways, known as the bronchioles, leading to the lungs, according to Kids Health. The bronchioles become inflamed, swell, and fill with mucus, leading to the difficulty breathing that Foster described. Fortunately, treatment usually lasts around a week and most babies come out just fine.

As the early symptoms resemble the common cold, the infection (often caused by a virus) can go undiagnosed until the condition worsens. Aside from coughing, Health Line lists shortness of breath, wheezing, bluish skin, cracking and rattling sounds in the lungs, fatigue, ribs that appear to be shrunken during inhaling, nasal flaring, and fast breathing as other symptoms.

Six-month-old Myah has since been hospitalized for her symptoms after her mom called emergency services and drove her in. Foster wrote:

When I arrived they checked Myah and three nurses ran off with her to immediately get her straight on oxygen. I was told they were surprised she didn’t end up in an ambulance. We had no clue how serious this all was until that point.

Myah remains in the hospital on critical care and is expected to stay for a week. Foster told Huffington Post UK that she is urging parents to listen to their gut and be aware of the risk of bronchiolitis in the winter season particularly:

It’s so easily missed and dangerous. I’d just like to stress to all parents that you know your baby better than any medical professional. You know if something isn’t right, you know when they need to be checked. Just because a doctor one day says the child is fine and there’s nothing to worry about, doesn’t mean the next day that things could have changed.

She went on to say that bronchiolitis changes quickly and parents should seek medical attention even if they are unsure whether their baby has it or not. "Never think you're wasting anyone's time. It's better to be safe than sorry," she added.

Cincinnati Children's Hospital Medical Center suggests that parents call a doctor if their children are experiencing symptoms of bronchiolitis and their symptoms seem to be getting worse, they aren't drinking enough (less than half of normal or making less than two wet diapers per day), or their children are at high risk — including being premature, having heart or lung disease, or having a nervous system disease.

Parents should head straight to the emergency room if the child is a bluish color, sleepy all the time, breathing fast and shallow breaths (more than 70 breaths per minute) or is using their stomach to breathe. When children use their stomachs to breathe, the ribs suck in and the nose flares.

Getting a proper diagnosis early on is key to getting your child through any illness, so please don't hesitate to get a professional opinion if your child is exhibiting symptoms.

More Like This
Kids With Head Lice Don't Need To Miss School, AAP Stresses In Updated Guidelines
What Parents Need To Know After DEA Issues Warning About "Rainbow Fentanyl"
New Report Shows 80% Of Pregnancy-Related Deaths Are Preventable
What Is RSV?