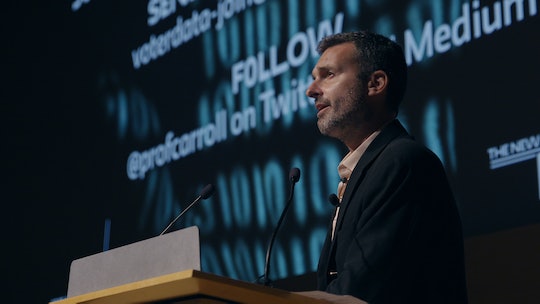 'The Great Hack' Breaks Down Exactly What Happened At Cambridge Analytica

Fresh off a run at the 2019 Sundance Film Festival, The Great Hack comes to Netflix. The film is a deep dive into the Cambridge Analytica/Facebook scandal which rocked social media in early 2018. Last year, for the first time in history, data surpassed oil in value. What that means is, as "the most valuable asset on earth," data can now be weaponized, and web surveillance has reached unimaginable heights. But since the scandal occurred approximately a million years ago in news cycle time, here's a quick refresher on exactly what Cambridge Analytica is and what it did for the Trump campaign.

Cambridge Analytica was a British political consulting firm founded in 2013 whose work is done by the behavioral research and strategic communication company SCL Group. According to Vox, Cambridge Analytica formed when Steve Bannon, one-time senior advisor to President Donald Trump, approached conservative megadonors Rebekah and Robert Mercer to form a political consulting firm. By mining, collecting, and analyzing data gathered from internet platform users — in this case, Facebook — Cambridge Analytica was able to form political communications strategies to target those users and allegedly influence voting. The firm was hired by both the Trump and the Brexit campaigns.

As Vox's Andrew Prokop put it:

SCL tends to describe its capabilities in grandiose and somewhat unsettling language — the company has touted its expertise at "psychological warfare" and influence operations." It’s long claimed that its sophisticated understanding of human psychology helps it target and persuade people of its clients’ preferred message.

So that's chilling. And when news broke that a researcher working with Cambridge Analytica on behalf of the Trump campaign got his hands on up to 87 million Facebook users' data, scandal erupted. According to The Guardian, Cambridge Analytica hired the company Global Science Research, owned by Russian-American Aleksandr Kogan, to harvest Facebook user data.

Kogan built a Facebook app quiz which harvested data from Facebook users taking the quiz. (This is what you're giving up when you download a new app and allow all those third-party permissions.) The app also exploited a loophole in Facebook's API which allowed it to harvest data on all the quiz-takers' Facebook friends, as well. Cambridge Analytica then sold that data to various political campaigns, which Facebook expressly prohibits. (Data harvesting by third-party app developers is OK, but they're not supposed to sell it.) The collection and sale of user data happened without the majority of Facebook users knowing about it, because most of them didn't understand that their public profile information was, well, public.

The Great Hack directors Karim Amer and Jehane Noujaim expertly lay all of this out in the film, and this is very much their lane. They were also behind the tech documentaries The Square, Control Room, and Startup.com. The duo earned a Best Documentary Oscar nomination in 2013 for Al midan, which also snagged a Primetime Emmy nom for Outstanding Documentary or Nonfiction Special. As for The Great Hack, it's now streaming on Netflix in all its terrifying glory.