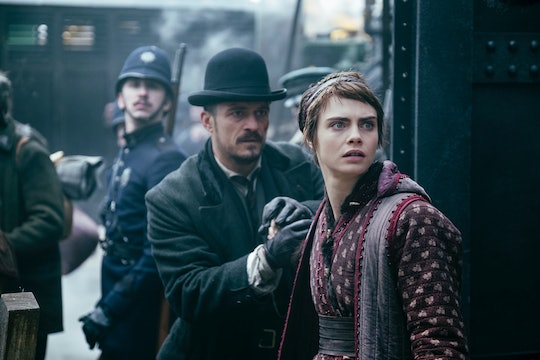 Amazon Prime's star-studded Carnival Row began generating internet discourse about whether it was or wasn't the next Game of Thrones well before its Labor Day weekend premiere. But with elements of fantasy, steampunk, and a Victorian period touch, the plot can get a little convoluted, so viewers may be wondering what Carnival Row is about before they commit to all eight episodes. The series focuses on a detective named Rycroft Philostrate (Orlando Bloom) — oh yeah, the names are just as confusing as Game of Thrones' characters — and a winged fairy, or fae, as they're called in the show universe, named Vignette Stonemoss (Cara Delevingne).

As you might guess, Philo and Vinny, as the pair are cheekily nicknamed, wind up in a sort of star-crossed romance between mortal and fae that drives the central conflict of the show. But there are far more magical creatures and political intrigue where that came from. The series takes place in a fictional place called The Burgue, which draws heavily from Victorian London inspiration. Carnival Row is The Burgue's red light district of sorts, where downtrodden magical creatures congregate. Humans and magical races coexist in The Burgue, though the latter are looked down upon by society and even have a designated slur: "critches."

As a soldier, Philo invaded Vinny's ancestral homeland, the island of Fae, and helped colonizers overtake it, displacing the magical creatures and rendering them refugees in human territory. Of course, a tense romance amidst warring factions also sparked, and when Vinny discovers Philo is still alive in The Burgue, she has a very sharp bone to pick with him.

Besides GoT, Carnival Row has been compared to Showtime's Penny Dreadful. But the budding romance amidst political conflict between differing magical species calls to mind stories like Wicked, too. The series clearly parallels a bunch of beloved fantasy media, but whether it manages to break through remains a question in early reviews. Carnival Row is based on a 2005 feature-length spec script called The Killing at Carnival Row, according to Vanity Fair's review, which also calls the series "dense, confusing, and (literally) dark." Amazon ordered three scripts for a series, initially to be directed by Guillermo del Toro, and later green-lit a pilot. But del Toro's involvement fell through due to scheduling conflicts. So the series is more or less an original idea, not based on any existing source material.

Outside the central love story, there's also a very The Magicians Season 1 subplot involving a mysterious creature who's slaughtering people. Philo is the police detective assigned to the case, thrusting him even deeper into the conflict between humans and critches. Other actors involved with the series, which filmed in the Czech Republic, according to The Verge, include GoT alum Indira Varma (who played Ellaria Sand on the HBO show), The Tudors' Tamzin Merchant, The OA's Alice Krige, and Jared Harris, fresh off an Emmy nomination for his work on Chernobyl earlier this summer.