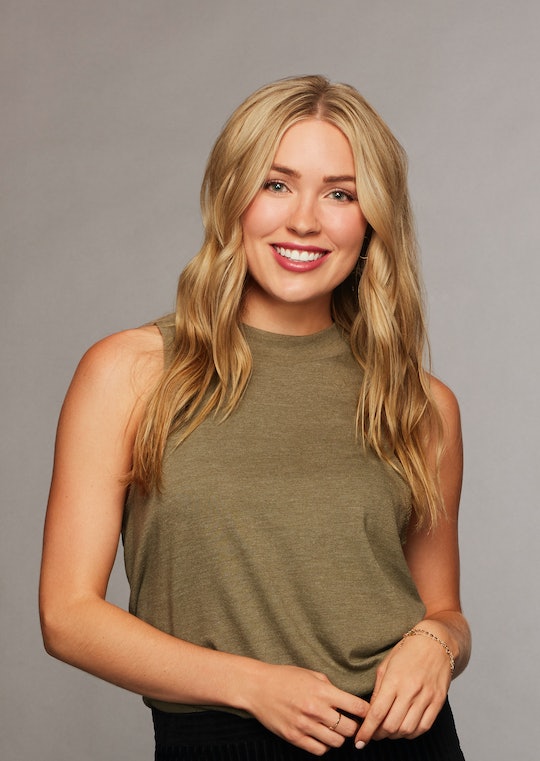 Cassie From 'The Bachelor' Helps People In The *Best* Way

Honestly, the best part in watching any season of The Bachelor? The "job" titles. If anyone can traipse out of a limo with the occupation (and costume) of "sloth," what else is left to prove? Nothing. Though those titles are fun to read, there's the thought that anyone who "makes a living" as a "free spirit" may not be there to find lifelong love and happiness. Alternately, a serious job title conveys the seriousness of the situation. However, top contender, Cassie, holds a real job title, so what is Cassie's job? The Bachelor contestant has a big heart, though the answer is a little complicated.

As the resident Huntington Beach, California gal, Cassie has the title of "speech pathologist," or (SPL), on her ABC bio. However, she recently clarified via her Instagram she's currently a grad student working towards her master's degree in speech pathology at the University Of Wisconsin Eau Claire, but her title is actually speech assistant (SPLA). She went on to explain she was asked to leave off the "assistant" part to "avoid confusion." Her bio does say she hopes to "one day open up a private practice to work with kids," so it sounds like, regardless of the title, she's on her way.

In case you aren't familiar with the lingo, speech language pathologists help with a multitude of things some may take for granted. According to American Speech-Language-Hearing Association, SLPs help with "communication" and "swallowing problems." You may not realize how those two things affect speech. SLPs treat issues in putting words and sounds together which, in turn affect social communication. SLPs also treat problems with stuttering, eating and swallowing, reading, writing, spelling, and other related disorders. This line of work — whether Cassie has her masters yet or not — helps people use their voice to communicate, and in other scenarios, survive. Those with a condition called dysphagia (a swallowing disorder) may struggle to suck, chew, and swallow food and liquid which can lead to "poor nutrition, weight loss, and other health problems." I don't want to call Cassie a saint, but facts are facts, people.

School aside, Linkedin says Cassie makes her cash flow substitute teaching ESL (English as a Second Language) at an adult school in Huntington Beach and as a substitute teacher in the Union High School District. It's clear teaching and helping people runs through Cassie's veins — something she and Bachelor Colton have in common (with his Colton Underwood Legacy Foundation that helps those with cystic fibrosis). As a 2016 Biola University graduate with a B.S. in Communication Sciences and Disorders, Cassie's career path seems in line with the personality she portrays on TV, and Colton has already taken notice. She really didn't need to be so "nervous" during the first meeting (with the box of fake butterflies to represent said nerves). Cassie, you're doing great, sweetie.

I know being a "twin" is cool, and so is the whole "sloth" bit, but neither pay the bills. When Cassie garners that masters and sets off on the official SPL path she's aiming towards, something tells me she'll be unstoppable. Plus, if everything you see from her is legit, Cassie's as real as it gets and I'm sure Colton sees that, too. It's hard to say if she'll end up with the final rose and engagement ring, but no matter how it ends, she'll make a living helping people and that's not nothing.