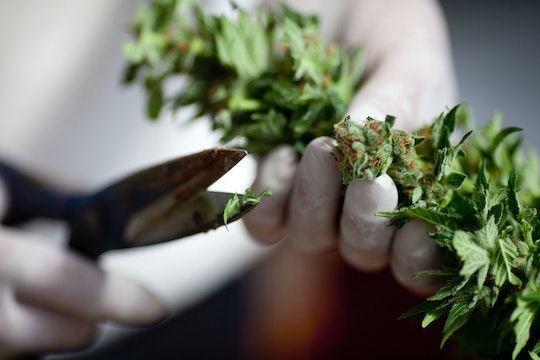 What Is CBD? It Could Help Kids With Epilepsy

Doctors are hopeful that a chemical compound found in the marijuana plant could soon be prescribed to help children with debilitating forms of epilepsy. While 28 states have legalized the use of medical cannabis in the United States, CBD — this specific chemical compound within marijuana — still faces regulatory hurdles before it can be made available more widely throughout the country. What is CBD? Short for cannabidiol, CBD has been shown to reduce seizures in some forms of epilepsy in several studies. However, because CBD has not yet been approved as a medication by the Food and Drug Administration, doctors haven't been able to prescribe it.

CBD is not the same as THC — tetrahydrocannabinol— the chemical that produces the high associated with marijuana, whereas CBD has no psychoactive effects. Even without the FDA's approval, 17 states have legalized the medical use of "low THC, high cannabidiol (CBD)" products, according to the National Conference of State Legislatures. Getting the FDA to approve the use of CBD as a medication has been an uphill battle, but a new medication that uses a pure CBD extract is currently under consideration by the FDA, and is set to be reviewed by the government agency this summer.

GW Pharmaceuticals are the makers of Epidiolex, a drug to help treat a particularly rare form of epilepsy known as Lennox-Gastaut syndrome. In September of 2016, the pharmaceutical company announced positive results in phase 3 trials of Epidiolex. There are two major actions that must happen before doctors can finally start prescribing Epidiolex: First, the CBD-based drug must be approved by the FDA. Second, the Drug Enforcement Agency must reclassify its drug scheduling of CBD.

While the FDA hasn't yet moved forward with an approval, the DEA created a new drug code for marijuana extract in December, according to the Federal Register. Buried within the three pages of of the drug schedule change is one very important section that pertains specifically to CBD:

However, if it were possible to produce from the cannabis plant an extract that contained only CBD and no other cannabinoids, such an extract would fall within the new drug code 7350.

Translation: That pure extract form of CBD developed by GW Pharmaceuticals would not be in the same drug classification as marijuana, which is still a Schedule 1 drug under the Controlled Substances Act and thus illegal. So while this new drug code legalizes CBD for medical use, it does not legalize medical marijuana on a federal level across the board.