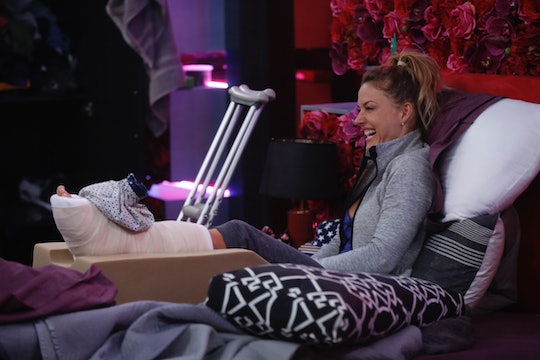 Christmas Has An Impressive Career Outside Of 'BB19'

Prior to entering the Big Brother house, Christmas Abbott was already pretty famous, in the fitness world anyway. She has a huge social media presence, she's written two bestselling books, and she offers fans fitness and business advice on her website. So what was Christmas' net worth before Big Brother 19? It's hard to say for sure.

On her Big Brother bio, Christmas says her profession is "Fitness superstar," which is certainly accurate, but doesn't have a set salary. Besides being a superstar, she's also a bestselling author and offers a fitness video subscription service ($89-$99) and one-to-one online coaching for $1,999. Christmas also own Bourn Relentless Nutrition, which is a nutrition supplements company that she's just starting to get off the ground.

It's clear Christmas knows how to stay busy and while it's difficult to know what exactly her net worth is, she appears to be well off. Then again, she's currently competing to win $500,000 so maybe she's not that well off. In either case, Christmas' career as a fitness superstar may have been put in jeopardy after she suffered a serious injury in the house.

After being blindsided by Cody and being put on the block, Christmas wanted to keep a positive attitude and still have fun in the house. She and Jason went to the backyard to joke around, as they regularly did, however, things went terribly wrong when Jason slipped while giving Christmas a piggyback ride.

Christmas had to get surgery but decided she would continue on in the Big Brother house. However, after getting said surgery, Christmas revealed to the other houseguests just how terrible the break was. She broke 10 different bones and one was so messed up that they had to put in a donor bone.

The doctor also said that in one to five years arthritis would set in and she would have to get another surgery on her foot. Obviously, for Christmas, who has built her career on being physically fit, this was a devastating blow. Though there's no doubt Christmas will be able to get through this, she'll definitely have to rethink her physical fitness and how she'll continue her business practices in light of this injury.

This accident will unfortunately cause problems for her in the long term and that's something she'll definitely have to think about once she leaves the Big Brother house. Hopefully, Christmas can still continue to do what she loves once the show is over.