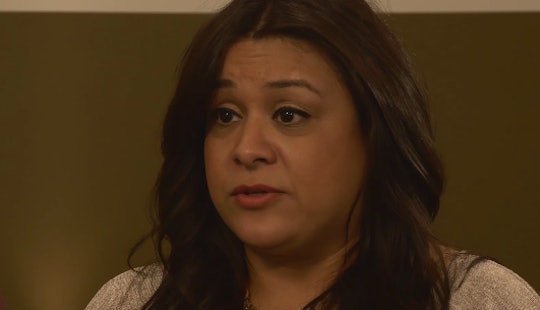 What Does Cindy Shank From 'The Sentence' Do Now That She's Out Of Prison?

In March 2007, police knocked on Cindy Shank's door and arrested her on federal charges of conspiracy for distributing drugs. The charges stemmed from a time in which she lived with a boyfriend who was a dealer, and after he died in a shooting, no charges were initially filed against Shank. But six years later, law enforcement authorities revived the charges and arrested Cindy, changing her life forever and leading her to become the subject of a new HBO documentary, The Sentence. Now that her life in prison is behind her, what is Cindy's job after The Sentence? It sounds like she's trying hard to live a normal life, with a normal job, and working hard to reconnect with the kids she had to leave behind when she went to jail.

Cindy was sentenced to 15 years in prison after being charged in connection with her boyfriend's drug operations, according to The Detroit Free Press. After he was shot and killed, police searched the home Cindy shared with him, and discovered cocaine, guns, and other evidence. She claims he was abusive and she was scared to leave, and is adamant that she had nothing to do with his drug activities.

Cindy was offered a plea bargain of 13 years if she pleaded guilty, but rejected it because she says she didn't know the extent of his crimes and did not participate in them, according to Newsweek. But she didn't go to jail until years after the charges were initially dropped, and her life was turned upside down by the trial and her subsequent prison term.

Cindy spent almost nine years in prison before being given a clemency exception by President Barack Obama before he left office in late 2016, The Washington Post reported. Though it wasn't the full term she was sentenced with, Cindy still missed valuable years with her daughters Autumn, Annalis, and Ava that she can't get back.

Those years are the focus of the HBO documentary The Sentence, directed by Rudy Valdez — her younger brother — who initially started filming events Cindy was missing in her daughter's lives, The Los Angeles Times reported. Those home movies turned into a documentary about both the years Cindy and her family spent apart and the issue of mandatory minimum sentencing in the United States.

While she was in prison, Cindy did a variety of jobs as part of the federal Unicor program, The Washington Post reported. She also took, and later taught, legal classes. After The Sentence, and following Cindy's release from jail, she is now an administrative assistant in Michigan, the outlet reported. She's one of the lucky ones: many people have a lot of trouble finding work after imprisonment. The fact that Cindy is employed means she's faring better than thousands of formerly incarcerated people in the U.S.

As much as it seems like Cindy has tried to get back to living a normal life after her sentence, her time in prison changed a lot. Her daughters have all lived years of their lives with just limited visits and phone calls acting as a link to their mom, and she and her husband, Adam, got divorced during her sentence.

But at least Cindy is able to work, to help support herself and the three daughters she's working so hard to reconnect with. Going to an office every day may not seem like freedom to the rest of us, but it's likely a welcome return to normalcy for the documentary subject and mother.