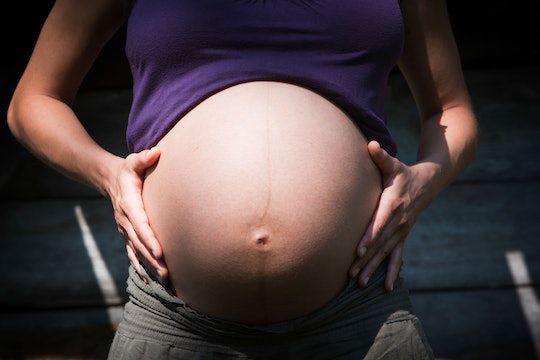 What Is CMV? Pregnant Women Should Really Know About This Virus

Pregnant women are warned of all kinds of possible risks and hazards: sushi, deli meats, smoking, alcohol, sleep aids, vigorous exercise, the Zika virus, and more. But there's one risk that some mothers wish they had been informed of about when they were pregnant. It's called cytomegalovirus, or CMV, and it affects more babies and mothers in the United States than Zika does, according to the New York Times.

Every year, between 20,000 and 40,000 babies are born with CMV, and up to 8,000 of them have permanent disabilities as a result. Some of the effects of the virus, if present in an infant at birth, include hearing loss, vision loss, intellectual disabilities, seizures, and small head size, or microcephaly, according to the Centers for Disease Control and Prevention. It's also possible for CMV to cause pregnancy loss. The type of CMV that has these harmful effects is called congenital CMV, and it's when a pregnant woman passes the infection to her infant before it is born. It has no known vaccine or treatment.

The virus usually has less serious effects when contracted after birth. About one-third of children have CMV by age 5, and about half of adults over 40 have CMV. But in these individuals, CMV doesn't often result in any visible symptoms.

Congenital CMV, however, is different. It has serious implications for the health of babies, and yet, for some reason, doctors are not talking to their pregnant patients about the risks. Pregnant women are not routinely screened for the infection, nor are they given advice about how to avoid contracting it during pregnancy. CMV is transmitted via urine or saliva, so handling diapers or toys could result in infection.

“Toddlers are hot zones for CMV,” Dr. Gail Demmler-Harrison, a pediatric infectious disease specialist, told the Times. For this reason, it's hard for mothers to protect themselves against the virus. And for the same reason, it's all the more important for pregnant mothers to be advised to wash their hands often and take extra precautions to shield themselves against CMV.

According to Net Doctor, there are a number of ways women can protect themselves and their babies against CMV during their pregnancy. One way is to avoid sharing food, cups, cutlery, or other potentially saliva-covered objects with children. Mothers can also wash any items that have been in contact with a child's saliva or urine, and they can make sure to scrub their hands often when dealing with children. Net Doctor also recommends kissing babies on their head or hugging them instead of kissing their face.

Some mothers have expressed concerns that this type of helpful information regarding CMV prevention should be given by doctors. However, the American College of Obstetricians and Gynecologists no longer encourages counseling on the subject, saying that counseling had not been proven to reduce the risk of CMV infection. Dr. Christopher Zahn, the vice president for practice at ACOG, told the Times that doctors should focus instead on conditions with proven interventions and let pregnant patients steer the discussion according to their concerns.

But if mothers knew about CMV and its potential health effects, it's likely that they would be asking doctors how to avoid the infection. The lack of public awareness about the infection, and a lack of encouragement to discuss it with patients, means that mothers don't really know what information they're missing out on. But congenital CMV has incredibly serious health effects, and everyone who is pregnant or wants to become pregnant should be aware of it.

More Like This
Does The FDA's Plan To Limit Lead In Baby Food Go Far Enough?
14 Recipes For Sick Kids When Everyone's Tired Of Canned Soup & Crackers
Viral Hives In Children: What Doctors Want You To Know
How To Fly Safely During Pregnancy
What Parents Are Talking About — Delivered Straight To Your Inbox