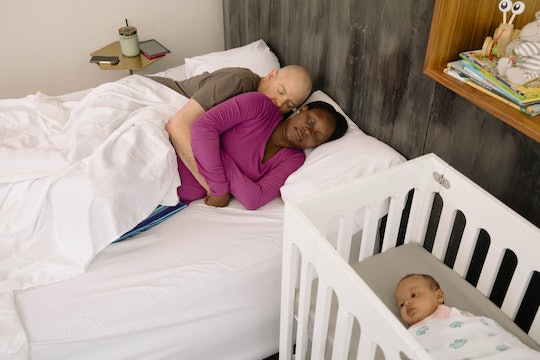 In Case You're Wondering, Here's The Actual Definition Of Co-Sleeping

Few things rankle the hides of mothers in the throes of the so-called "mommy wars" more than the topic of co-sleeping. Is it safe, or dangerous? Is it natural instinct, or just laziness? Above all, what is co-sleeping? Turns out, it's more complicated than it sounds.

Contrary to some misconceptions, co-sleeping does not necessarily mean bed sharing. According to The Mother-Baby Behavioral Sleep Laboratory at the University of Notre Dame, co-sleeping is any sleeping situation in which an infant and primary caregiver are "within sensory range" while the baby sleeps. This allows the caregiver and the infant to "respond to the sensory signals and cues of the other." Their observational research supports the notion that, for breastfeeding parents, shared sleeping space, whether a bed or a room, is a natural instinct.

There are many different ways to co-sleep, each with varying levels of safety considerations to ponder, according to the experts. For example, room sharing is any sleep arrangement where the caregiver(s) and infant share a a room, but not an actual sleep surface. The American Academy of Pediatrics (AAP) released new infant sleep recommendations in Oct 2016, encouraging parents to room share on separate sleep surfaces for at least the first 6 to 12 months of their infants' life. Their evidence-based rationale is that room sharing will, among other things, decrease the risk of Sudden Infant Death Syndrome (SIDS).

Bed sharing is a controversial topic, however. James McKenna, PhD, and Director of the Mother-Baby Behavioral Sleep Laboratory, has said he would like to see doctors giving sleep recommendations that take into consideration the individual family's and cultural needs. In some cases, with safe sleep spaces, these recommendations may include bed sharing.

Other sleep surface sharing, such as recliner, couch, or floor are generally thought to be unintentional or occasional co-sleeping arrangements where the caregiver accidentally falls asleep due to exhaustion. The AAP and McKenna agree that these accidental co-sleeping situations should always be avoided for the safety of the infant.

Kelly Bonyata, International Board Certified Lactation Consultant (IBCLC) and founder of the Kellymom.com, differentiates between bed sharing and co-sleeping and offers an extensive list of co-sleeping definitions, options, and safety precautions parents can take whichever sleeping arrangement they choose.

When discussing co-sleeping it should be noted that co-sleeping proponents cite nighttime waking as a positive reason to co-sleep. As McKenna explains, "Mostly infants wake up because it is in their best interest to do as their neurobiology is not designed for sustained, deep, and consolidated sleep at young ages, before six months of age."

When considering sleeping arrangements for your family, co-sleeping of any of the kind is just one of your numerous options. There are a whole host of factors you'll weigh in making the best, safest, and most successful decision for your family's needs.