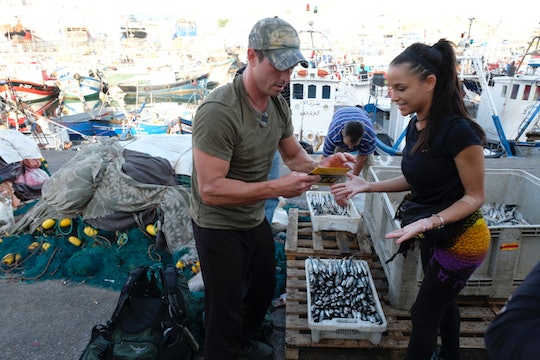 The Amazing Race Season 30 is well underway and Team Big Brother, Cody Nickson and Jessica Graf, are off to a great start. In the first episode, the couple came in second and in last week's episode they claimed first place, earning $2,500 each. But what do these two do when they're not traveling around the world, competing in competitions. Since the show is prerecorded Jessica and Cody are home now, so what is Cody's job after The Amazing Race?

Prior to becoming a reality star, Cody was a marine, hence his Twitter and Instagram handles, @CodytheMarine. However, after competing on Big Brother 19, where he won America's Favorite Houseguest and $25,000, he listed himself as unemployed on his Amazing Race profile. Now, following his second reality competition series, it appears Cody is becoming a YouTube sensation, along with Jessica.

The couple have begun their own YouTube channel, Living Jody, where they share videos of their home life with their dog, Bear, and some of their other every day adventures. They've already amassed a following of 20,000 subscribers and over 316,000 total views. Thus far they've shared a look into how they spent their first Christmas together, the items they got to keep from their time in the Big Brother house, some recipes, and what they packed for The Amazing Race.

Outside of their YouTube videos, Cody has also become an Instagram promoter for the fitness brand, Vita Goods. Aside from that, it appears Cody is just enjoying being at home with Jessica, and spending time with her, his daughter, Paisley, and the rest of his family.

Cody and Jess have also been attending a number of events promoting this season of The Amazing Race and doing some TV interviews for the show as well. They've also been having fun hanging out with the other teams from the show, especially Team Indy Car, also known as Alexander Rossi and Conor Daly. The two teams even had a joint premiere event in West Hollywood a couple of weeks ago. So it seems Cody and Jess had a much better time making friends with their castmates this time around compared to their time in the Big Brother house.

That's not to say they haven't been keeping up with some of their old housemates as well. Cody and Jess have kept in touch with one of the other BB19 showmances, Mark Jansen and Elena Davies, also known as "Marlena." The four of them have met up a few times since leaving the Big Brother house to go on some double dates, and they still interact quite a bit on social media. Other than "Marlena," it doesn't look like Cody and Jess really talk to anyone else from BB19, but that's perfectly understandable considering how the house turned on them pretty early on in the season.

Since Cody isn't working, and it doesn't look like Jessica is working either, it's easy to speculate that the couple won The Amazing Race and the $1 million dollar prize. However, fans won't know if that's true or not until Cody and Jess either get eliminated or win in the finale. For now, it's clear that the couple are living comfortably, so whether they won or not, they're obviously making enough money that neither of them need to have a day job, at least for now.

You can see Cody and Jess continue their journey around the world in a new episode of The Amazing Race, which airs every Wednesday at 8 p.m. EST. Don't miss it!