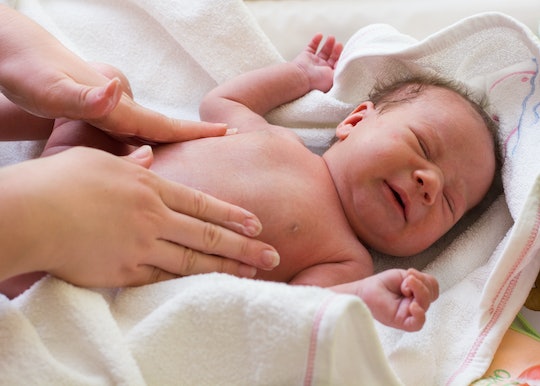 What Is Colic? Here's What You Need To Know To Get You Through

You did it. You had your beautiful baby, you made it home, you're starting to find a routine in the craziness that is welcoming a new child into the world. Feeding schedules, admiring your handiwork, finding a few moments of sanity here and there — you're doing it, you're really doing it. And then, a few weeks go by, and the crying starts. And it won't stop. Nothing seems to be wrong. You've gone through every possible explanation and found nothing. The next day, the same thing. And then you realize: your baby has colic. But what is colic?

The Mayo Clinic defines colic as "a frustrating condition marked by predictable periods of significant distress in an otherwise well-fed, healthy baby. Babies with colic often cry more than three hours a day, three days a week for three weeks or longer. Nothing you do to try to help your baby during these episodes seems to bring any relief."

According to Parents, there are many theories as to what causes colic. In an interview with American Baby magazine, Dr. Harvey Karp said that he believed it was part of the babies adjustment to life outside of the womb, or "the fourth trimester," as he called it. Karp went on to state that some doctors believe it's an imbalance of bacteria, and some doctors believe the condition stems from an imbalance of melatonin and serotonin in the brain. However, none of these theories have been proven in babies with colic, and at its core, colic is an inexplicable phenomenon.

The truth is that all babies cry when they experience distress. In fact, according to What To Expect, it's the best (and only) way for babies to communicate what it is they need. But in babies with colic, the crying seems to appear out of nowhere, with no rhyme or reason, and happens around the same time every day. According to What To Expect, colic is not a disease or a diagnosis, but rather a way to describe a combination of confusing and inexplicable behaviors in your child.

According to the Mayo Clinic, for most babies colic is relatively short-lived, and should end in a matter of weeks or months. Though those weeks and months can be distressing to both you and your child, all you can do is stay calm, and attempt to create a calming environment for your baby. According to WebMD, bright lights and sounds can add extra stress to an already colicky baby. The site recommended warm baths, swaddling, dark environments, and gentle massage to aid in providing a calm environment. WebMD also recommended using sound to help comfort your baby. The low hum of the clothes dryer, a fan, or a white noise machine may help your baby find peace during their colicky period.

If you think your baby may have colic, you may want to talk to your doctor — if only for reassurance that it really is colic. What To Expect recommended being prepared to detail your baby's crying from duration, to intensity, to pattern, to help your doctor rule out any other possible causes for the crying. During your baby's colicky period, just try and remember, colic doesn't last forever.