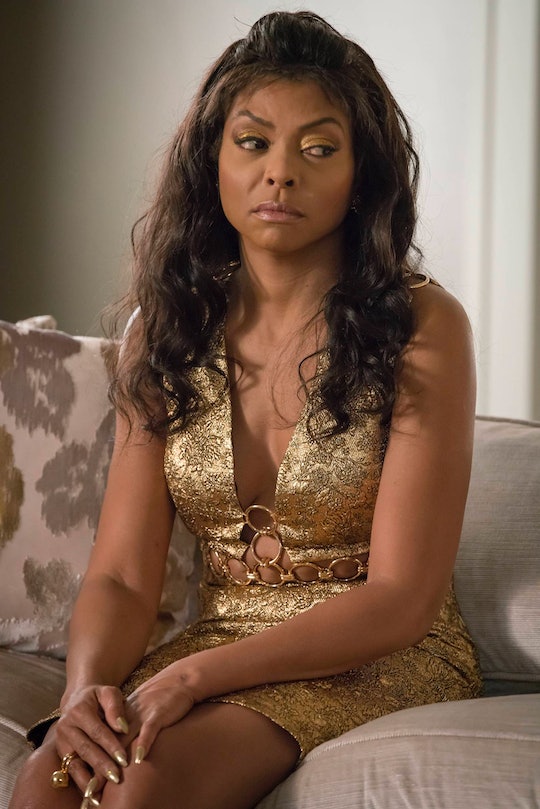 What Is Cookie's Secret On 'Empire'? Not Even Her Kids Know About It

Empire is hurtling toward its fall finale on Wednesday, Nov. 30, but in the meantime, Cookie seems poised to drop a Lyon family bombshell that will hang over them all until next spring when the drama picks back up again. The feds hold a growing list of suspicions against Lucious, now including but not limited to the death of Frank Gathers, but Cookie is harboring a big secret of her own that not even her kids know about. So what is Cookie's secret on Empire? Now that she's on the cusp of beginning a new relationship, it looks like fans are going to find out sooner rather than later.

In the preview for episode 6, "Chimes at Midnight," we see Cookie sit Angelo down for a heart-to-heart reveal in which she confesses, "There's some things about my past... you have no idea." Of course, she could just be referring to her litany of experiences hustling — the details of the crimes she's been convicted of, and the experiences that continue to haunt her. And, like Lucious, there's probably plenty of childhood trauma we haven't even begun to explore yet in Cookie's flashbacks. But the sneak peak of "Chimes at Midnight" hints at the fact that there may be new information about Cookie we're going to learn.

Namely, the fact that Jamal is so interested in the reveal of Cookie's secret seems to point to the fact that it's something not even the family knows about. "You can talk to me," he reassures her over a meal, "If you love me, you ain't gotta lie to me."

Jamal also writes what sounds like a heartbreaking song about Cookie, telling Lucious that the family has so many secrets, he's going to set them all free. The sneak peek ends with Jamal mixing what looks like a dangerous blend of alcohol and pain killers, leaving Andre unable to wake him up after he passes out. Might Jamal have revealed Cookie's secret after she confided in him? Did it cause blowback so severe that he sought to numb his guilt, only to put his life at risk yet again? It seems unlikely that after escaping death so narrowly last season, Jamal would try to end his life on purpose. And will Angelo stick by Cookie after pushing so hard for her to be more vulnerable and open up? Or will her secret prove to be too much for him? Everyone will find out (hopefully) when "Chimes at Midnight" airs on Wednesday, Nov. 16.