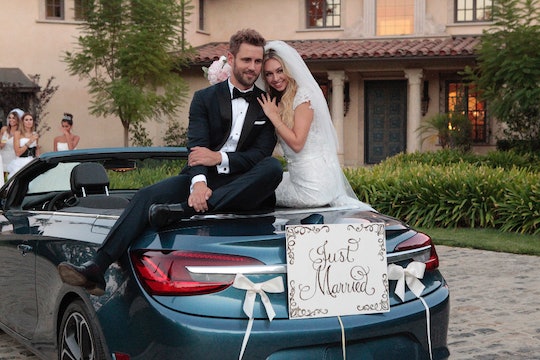 Corinne Is Keeping Herself Busy Post-'Bachelor'

We're just two episodes into the ~most dramatic season ever~ of The Bachelor, and the breakout star of Nick Viall's assortment of gorgeous (and much younger) women is obvious. As it stands, Corinne Olympios is the most talked-about Bachelor contestant of the long-running reality dating show's latest season. Everyone from Jennifer Aniston to Bachelor in Paradise alum Ashley Iaconetti has weighed in on their opinions about the golden-hearted blonde with the "platinum vagine." The season has officially wrapped and the winner of Nick's heart has (theoretically) been chosen – so what is Corinne doing now, post-filming?

For all I know, Corinne might be enjoying lowkey-engaged life right now, assuming she made it to the final rose ceremony and Nick got down on one knee before her. At this point, she's got a solid shot. Week 2 established that Corinne and Nick have oodles of sexual chemistry. She even won both the first group date rose and the adorkable wedding photoshoot challenge. Of course, we won't know whether that's the case until the season finale airs later this year (or whenever Corinne is eliminated, if she doesn't make it to the Final Two).

One thing that we do know about Corinne's post-Bachelor life is that she's back at it with her modeling career. Since she finished filming, the blonde family-business owner has been posting many professional modeling shots. It's quite clear that Corinne loves being in front of the camera, because she's working it in all of her photos.

On top of working on her entertainment industry prospects, Corinne has also spent time with her family. She's shared several photos of herself with her younger sister, Taylor Olympios, including one montage of the two of them ringing in the new year at Fontainebleau Miami Beach.

Perhaps surprisingly, in the aftermath of the show, Corinne has also spent time hanging out with her fellow Bachelor contestants. Despite butting heads onscreen, it seems that the women have put their differences (and their very vocal dislike of Corinne) behind them, post-filming.

The Miami native also posted a Snapchat video clip from the same night, apparently taken by Jasmine, where Corinne is dancing. The caption on the video refers to Corinne by her preferred nickname ("Corn") and includes the hashtag #yeswearefriends. Granted, this group hang did technically take place before any of Corinne's confessional rants aired – so we'll see if that will impact the IRL friendships of Nick's lady-suitors.