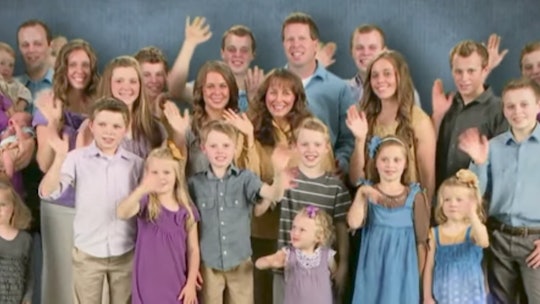 What Is Courting? The Duggar Family Has Strict Rules About "Dating With A Purpose"

By now, fans of TLC's Counting On are all too familiar with the term "courting." However, there was a time when the concept was relatively new — at least to the mainstream population. It was probably back in the days of 17 Kids & Counting when longtime fans were first introduced to how the Duggars approached courtship — when Michelle and Jim Bob's eldest child, Josh, entered into one. Since then, plenty of siblings have gone on to begin courtships, get engaged, tie the knot, and start families of their own. So what is courting, exactly? The Duggars have strict rules when it comes to "dating with a purpose."

Considering their fundamental Christian faith and highly conservative values, it comes as little surprise that the Duggars approach relationships a bit differently than most people. Instead of dating, Michelle and Jim Bob's older children have participated in a process called courtship, which is basically dating — but with the idea of marriage in mind, according to People. Oh, and did I mention there are ton of rules attached? Yeah, then there's that. "The main difference between courting and dating is setting boundaries for yourself so that you don't cross over those," Jill Duggar explained on 19 Kids & Counting back in 2014.

The first step, according to this "Courting 101" video, is for a potential male suitor to approach Jim Bob. "If a man pursuing a girl's heart, definitely the guy needs to talk to the girl's father," Jessa Duggar explained at the time. "So for us, guys would approach our dad and talk to him about that, kind of make their interest known." Jill added, "If they don't know that process ... then we might be sure and tell them."

For Jessa and Ben Seewald — who are married with two children these days — the rules were no holding hands, no kissing, always having a chaperone, and side hugs only — which is pretty par for the course, when it comes to Duggar courtships. Each couple is responsible for setting their own standards, though. And then it's their family's responsibility to help hold them accountable. This means being in the company of at least one chaperone at all times. (Can you imagine having at least a third wheel on all your dates, and having your parents sit in on video calls?)

Even so, the Duggars have acknowledged that sometimes the rules aren't perfectly followed. Right after Joy-Anna Duggar and Austin Forsyth became engaged, they pair was caught on-camera give a frontal hug instead of a side hug, according to People. “We’re humans and sometimes we don’t always abide perfectly by our rules,” Austin said of the slip-up. “We try. That was a real hard try.” For the record, Jill Duggar had a similar experience when she was courting Derick Dillard. They were so excited to see each other at the airport, after being apart for two months, that they too ran into a full-on hug, according to ABC News.

Once a Duggar becomes engaged, the couple then decides on a new set of standards, Engagement typically means it's okay to hold hands and say, "I love you." Jill Duggar explained that once she and Derick got engaged, they were allowed to hold hands, but they still wanted to save that first kiss for their wedding day. So far, it seems as if all the married Duggar siblings have followed suit. Only after they are married do Duggars do anything completely alone — which of course includes having sex.

The ultimate goal of courting, according to Michelle Duggar, is to discover if you're compatible with that other person. It's about getting to know each other in a safe setting — and sometimes, the end result is realizing that person isn't "the one." (If you remember, Josiah Duggar entered into a courtship with Marjorie Jackson before they split and he eventually courted — and married — Lauren Swanson.) “There is no failed courtship,” Michelle told Today. “A parent that loves and cares for their children, they want the best relationship for their child. It’s fun to be involved in the whole process in choosing it.”

Whether or not you agree with the Duggars' approach to relationships, overall, it seems to work pretty well for them. (You know, with the exception of Josh's marital issues.) As long as no one is being forced into marriage, I say, "You do you, guys."