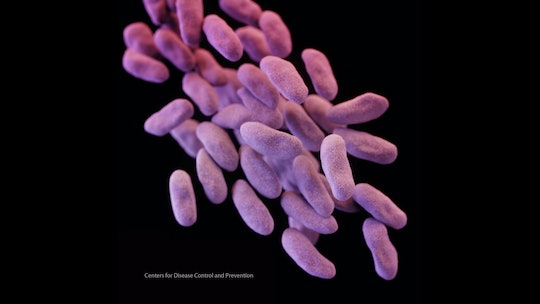 What Is CRE? The "Nightmare" Superbug Is Reportedly Drug-Resistant

Sometimes the scariest things can be invisible. That is certainly the case with CRE, a “nightmare” superbug that is reportedly drug-resistant. On Thursday, the U.S. Department of Defense announced that the first known case of a carbapenem-resistant Enterobacteriaceae (CRE) infection had hit the United States, and everyone started panicking.

The infection is rare, according to Dr. Tom Frieden, director of Centers for Disease Control and Prevention who announced the case at the National Press Club in Washington D.C. Nevertheless, he called it “a nightmare bacteria” in an interview with The Washington Post. CRE, a strain of E. coli, is seemingly resistant to all known antibiotics including Colistin, which often serves as a last resort when all other antibiotics fail.

A 49-year-old woman’s urine tested positive for CRE last month. She had not traveled outside the United States within the past five months. There are no more details available about the case including how the patient contracted the infection in the first place.

CRE is spread through contact with an infected person, particularly contact with a cut or stool. The bug is more likely to infect patients in acute and longterm healthcare facilities than healthy individuals. Those who are already ill or with weakened immune system are also more at risk.

This is the first case seen in the United States but the antibiotic-resistant bug has appeared in other parts of the world. Last November, public health officials were horrified when Chinese and British researchers discovered the colistin-resistent bacteria in pigs, raw pork meat, and even some humans in China. The deadly superbug has since been spotted in Africa, Europe, South America, and Canada.

In a study about the Pennsylvanian’s case published Thursday in Antimicrobial Agents and Chemotherapy, Defense Department researchers wrote that the discovery “heralds the emergence of a truly pan-drug resistant bacteria.”

The so-called “superbug” kills up to 50 percent of those infected, according to the CDC.

It is an alarming development and U.S. public health officials fear it signals “the end of the road” for antibiotics as we know them. “We may be in a situation,” Frieden posited, “where we have patients in our intensive-care units, or patients getting urinary tract infections for which we do not have antibiotics.”

This is a bleak prospect for Frieden who has seen what happens when there are few treatment options available to patients. “I’ve been there for TB patients,” he said. “I’ve cared for patients for whom there are no drugs left. It is a feeling of such horror and helplessness. This is not where we need to be.”

Pennsylvania Gov. Tom Wolf released a statement addressing the case of CRE infection in his state. “We are taking the emergence of this resistance gene very seriously,” he said. He assured the public that his administration was working closely with the CDC and Department of Defense on organizing “an appropriate and collaborative response.” Wolf added that officials were willing to undergo any measures necessary to prevent the superbug from spreading, a problem with “potentially serious consequences.”

The antibiotic-resistant gene in CRE can be transferred from bacteria to bacteria, infectious disease experts say. It has been discovered in livestock for the most part but it can and has appeared in humans too. According to Yohei Doi, an infectious disease doctor at the University of Pittsburgh, the gene is likely moving between livestock and people through food. “Food handlers may be at higher risk,” Doi says.

This can prove an exceptional risk in places like China where live animals are sold in close proximity to food stalls and CRE can spread easily between the two. In the United States, however, it is a different story, Doi said. American food is sealed in plastic packaging and containers. “These are the reasons why I don’t think we need to panic,” he said. Still, Doi is concerned about CRE’s appearance within North America. “It does tell us that this concerning gene is in the United States,” he said, “and we need to find out what the extent of the problem.”

Public health officials are not surprised to find a CRE case in the United States and they have, in fact, been preparing for it. Yet there is still no answer to the dwindling effectiveness of antibiotics.

As resistant bacteria spread, doctors are limited in their treatment options. Small infections can become deadly, routine operations life-threatening, and pneumonia impossible to treat. Researchers are looking for an answer to these so-called superbugs as they appear in more patients across the world.

David Hyun, a senior officer leading an antibiotic-resistance project at the Pew Charitable Trust, found the Pennsylvania woman’s case “alarming.” “The fact that we found it in the United States confirms our suspicions,” the researcher told The Post, “and adds urgency to actions we need to work on antibiotic stewardship and surveillance for this type of resistance.”