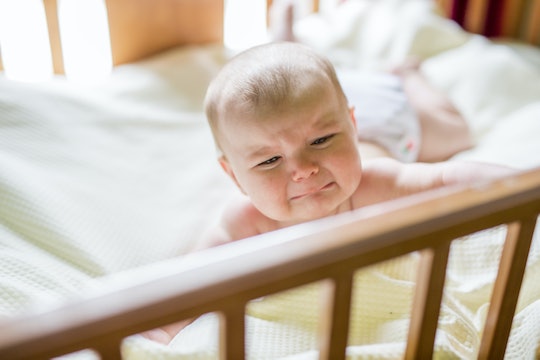 What Parents Should Know About Crying It Out

Sometimes all parents can think about, especially in those first couple months of parenthood, is how to get a good night's sleep. As a result, it's not uncommon for parents to seek out information about anyone and everyone's preferred sleep training methods. If you find yourself in this exact position you'll likely be asking yourself sometime soon, if not already, "What is crying it out?" Turns out, it's honestly not as bad as it sounds.

Simply put, crying it out (CIO) the term used for the sleep training practice where, according to The Baby Sleep Site, parents set boundaries about how they will and will not respond to their baby when they put baby down to sleep. Rather than one particular method, CIO is an umbrella term that includes many different specific methods of sleep training.

A 2016 study reported by the American Academy of Pediatrics (AAP) suggests that one such method dubbed "graduated extinction," in which parents delay their response time to a baby's night waking in the hopes their baby will learn to self-sooth and put themselves back to sleep, does not have a negative impact on baby's attachment to caregivers.

Still, other parents and researchers disagree. In October of 2016, Psychology Today's Angela Braden presented a counter-argument to the AAP's reassurances. Braden calls into question the validity of that research, stating that CIO methods go against the natural instincts of parents and the inherent needs of babies, while disregarding the infant's emotional health.

There are all kinds of CIO methods. One such often criticized, and misunderstood, is the Ferber method. Baby Center reports that Richard Ferber has taken great pains to clarify he is not, nor has he ever, suggesting simply leaving an infant to cry until they throw up. The consensus of all sleep training professionals, from Richard Ferber to attachment proponent, James McKenna, seems to be that each family needs to decide what is best for their particular family's needs and their particular baby's temperament.

If you decide to try a CIO method, The Baby Sleep Site provides an extensive list of do's and don'ts of sleep training. If, on the other hand, you don't decide to try CIO, of course that's OK, too. In the parenting world we have enough to worry about, figure out, and live through without in-fighting about sleep training (or not sleep training, as the case may be.)

As with non-CIO methods, CIO methods are evidence-based, as the above resources show, to get infants to sleep in a way that works for the families who use it. I hope we can all see that even if the parent next to us chooses a different sleeping style neither of us is intentionally hurting their child. So cry it out or not, here's to a happy sleeping family.