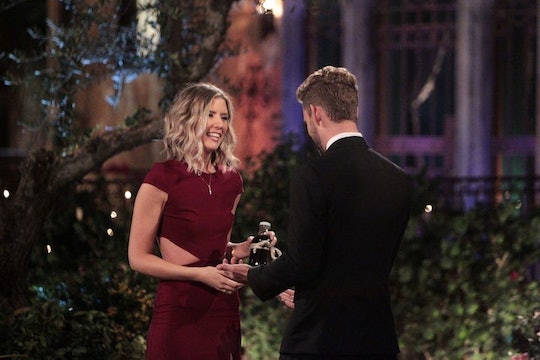 Danielle M. Has No Shortage Of Friends

While Corinne Olympios is stirring up plenty of drama on The Bachelor this season, Nick Viall isn't exactly making things easy for the women he's hoping to woo this time around. On last Monday's episode, viewers were left with a surprising cliffhanger, where it certainly seemed as though Nick was about to breakdown and quit The Bachelor altogether. While I'm virtually positive that won't actually happen, his indecisiveness is definitely stressing us all out. Let's take a minute and focus on brighter things — like the contestants' post-show lives. For one, what is Danielle M. doing now after The Bachelor wrapped filming?

In spite of all the Corinne-centric feuds and antics going down this season, Season 21 is shaping up to have more than a few memorable contestants. Rachel Lindsay, for one, is already gaining a ton of hype from fans who desperately want to see her as the next Bachelorette (myself definitely included). Kristina Schulman, too, is picking up some Bachelorette votes following her heartbreaking confessional moment on the most recent episode.

But it goes without saying that Danielle Maltby is also one to watch on the show: remember Lacey saying that she didn't realize there were even people that nice after Danielle got the first one-on-one? The neonatal nurse may be quiet and a little bit shy, but she's definitely a frontrunner in Nick's eyes and possibly one of the nicest contestants the show's ever cast. Exhibit A: just look at how sad Danielle was on Nick's behalf when he gave his tear-filled "I don't know WTF I'm doing" speech to the women.

So, what's Danielle up to after leaving the Bachelor mansion behind? Based on her social media presence, she seems to be doing well and enjoying life. For one, she's been hanging out with the friends that I assume she's had since her pre-Bachelor days. But she's also one of the contestants who appears to have grown the closest to the fellow women vying for Nick's affections this season. She's posted tons of photos of group and one-on-one hangouts with the other Season 21 ladies.

Danielle hung out on her home turf in Nashville with Kristina, Vanessa Grimaldi, and Taylor Nolan, who all apparently went there to visit her.

Recently, the 29-year-old Wisconsinite also went on a nature hike with Liz Sandoz, Nick's old hookup who was unceremoniously booted from the show mid-date a few weeks back.

Danielle, who has done some modeling and music video appearances in the past, also celebrated reaching a big social media milestone. She surpassed 100,000 followers on Instagram and celebrated with a professional photo shoot, complete with a "100K" balloon.

Bachelor Nation still isn't sure whether Danielle will win Nick's heart in the end. She was an early frontrunner with the first one-on-one, but Vanessa, Raven, and Rachel are proving to be stiff competition. Even if Danielle doesn't walk away with Nick's final rose, maybe she'll have a shot a shot of her own at being the next Bachelorette.