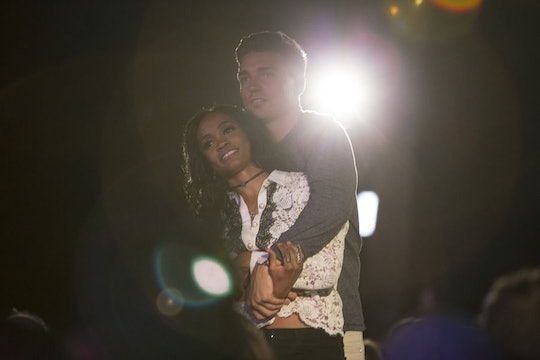 Dean May Have Found Love After 'The Bachelorette'

Rachel Lindsay powered through her remaining suitors in a two-night, four-hour Bachelorette event as the group traveled its way through Scandinavia, leaving us with just six contestants and hometowns right around the corner. Most fans are keeping a keen eye trained on Dean, Peter, and Bryan as the season's leading contenders. Peter has megawatt charm and Bryan's chemistry with Rachel is off the charts. But Dean, despite his age, has seemed to hook Rachel with his tender backstory about losing his mom as a kid. So what is Dean doing after The Bachelorette? Are there any clues tying him to Rachel?

The 26-year-old startup recruiter has been pretty active on social media, but almost exclusively with regard to the current season of The Bachelorette. He did post a couple of photos of a motorcycle he converted right after the season started airing, but mostly, he's been posting behind-the-scenes pics with his bros from the house and episode screenshots featuring heartfelt dedications to Rachel for being so supportive during his vulnerable one-on-one date. Over dinner, he revealed the story of how, following his mom's death when he was an adolescent, he experienced extreme loneliness as his siblings left home, his family withdrew to grieve, and he was left by himself to finish out high school.

Wrote Dean in the caption of an old photo of his mom:

I never thought my story was special. Death is the only thing we can be certain of and everyone is afflicted by it. I've spent the last 11 years of my life glossing over my emotions and never really opening up about how it's affected me because I thought it was something I should just deal with on my own. I have so much love and respect for Rachel (and @bacheloretteabc) for allowing me to share my story and, most importantly, honor my mother, Debbie. That was an incredibly emotional night with A LOT more tears shed off camera. I only hope this helps others who are dealing with something similar to not make the same mistake I did. Every story is special. Opening up about it has only strengthened my relationships with friends & family.

But in addition to recovering from his totally soul-baring on-camera moment, there are a few rumors afoot that Dean may have found a spark with another Bachelor alum who also revealed some memorably heartbreaking childhood trauma on air. A source revealed to ET that he went on a date with Kristina Schulman from Nick Viall's season — the adopted Russian immigrant who left her orphanage at age 12 to come to America. Her story earned her instant fan love and Bachelor Nation eagerly started shipping these two tender souls when she tweeted in defense of Dean's young age.

Obviously, viewers can't confirm whether or not they went on a date, but it seems like Dean and Rachel didn't end the season engaged. I'd be willing to bet we see him on a hometown date, though, so Dean's star hasn't burned out just yet.