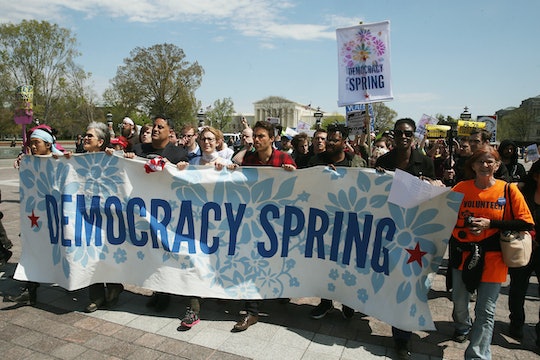 What Is #DemocracySpring All About? Protesters Demand An End To Money In Politics

At the heart of the primary season this week, thousands of activists protesting the role of money in politics marched for 10 days and more than 140 miles from the Liberty Bell in Philadelphia before arriving in Washington D.C. On Monday, hundreds of those protesters were arrested after refusing to leave the U.S. Capitol steps, where they had staged a subsequent sit-in. The protesters are a part of Democracy Spring, which started as a loosely organized movement whose goal was to reform campaign finance, and is now quickly gaining attention and trending on social media. So what, specifically, is #DemocracySpring all about?

According to its official website, the group is demanding that Congress “take immediate action to end the corruption of big money” in politics and has said that it plans to stay at the U.S. Capitol until change is made. In this case, they argue that a viable small-dollar public funding system for federal elections should be created and that Citizens United, the controversial Constitutional amendment that lifted restrictions on corporate money in politics, should be overturned. The movement has attracted thousands and the group plans to sit-in at the Capitol building through to next week, if they aren’t booted before then.

So far, over 400 protesters have already been arrested for “civil disobedience.” Not all of the protesters in D.C. participated in the 10-day march from Philadelphia — many came by planes, trains, and automobiles to join the group on Monday — but the sentiment among them remained equally impassioned.

“We will demand that Congress listen to the People and take immediate action to save our democracy,” a statement on the group’s website read. “And we won’t leave until they do —or until they send thousands of us to jail, along with the unmistakable message that our country needs a new Congress.”

At the height of the movement on Monday, the group announced on their Facebook page that police were running out room in jail.

More than 3,000 people so far have pledged to risk arrest, and they've been supported by several high-profile public figures, such as actors Mark Ruffalo and Sam Waterston, as well as linguist and political activist Noam Chomsky. Several notable organizations, many supporting Democratic presidential candidate Bernie Sanders, have also lent their support. Although many of Monday’s attendees were spotted sporting Sander’s gear, the group maintains its nonpartisan stance and is not in favor of any candidate.

Despite the high number of arrests so far, Democracy Spring protesters remain steadfast in their goal. "Statue of Liberty just got arrested," The Young Turks host Cenk Uygur tweeted on Monday evening, posting a photo of an activist who was dressed as Lady Liberty. "But that's not the end of freedom, it's the beginning!"

The sit-in may be scheduled to last for the next week, but it seems that the fight against money in politics will continue on much longer.