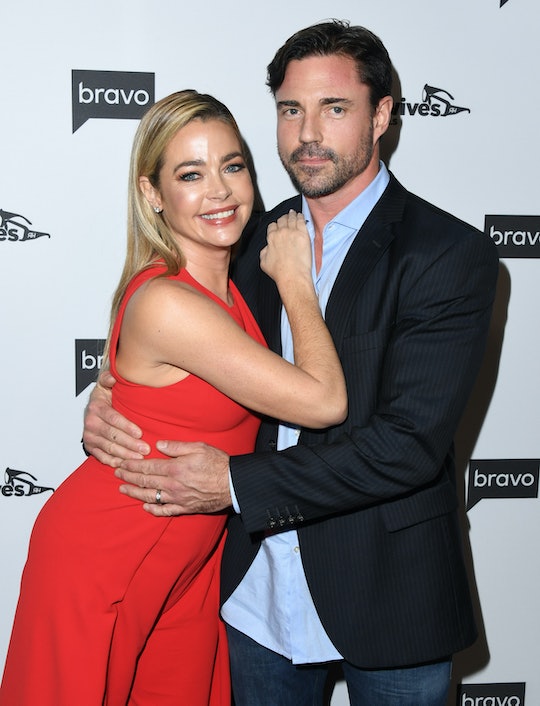 Denise Richards' Husband's Job Is Hard To Explain, Even For Her

Anyone who watched Denise Richards' whirlwind wedding on The Real Housewives of Beverly Hills can tell that she adores her new husband Aaron Phypers. But Aaron himself has remained something of a cypher to the audience, not least because it's hard to figure out exactly what he does. He's a great partner to Denise, he loves her kids, but every description she gives of his job sounds incompressible. So what is Denise Richards' husband's job?

Aaron and Denise actually met because of his highly confusing career. On the show, she revealed that they first crossed paths when she "started going to his clinic where he does a lot of frequency work and balancing the body." What did that mean? Even Denise didn't seem to really get it, though she later referred to his work as "DNA repair, anti-aging, and that sort of thing." It's starting to sound like he runs the clinic that Madeline Ashton goes to in Death Becomes Her. Does he provide his clients with the secret to eternal youth? It would explain a lot.

But no, it seems Aaron's job isn't quite as mystical as it seems. He runs Q 360 Club, which is "a state-of-the-art healing center," according to their website.

The Q 360 website goes on to say that they utilize a holistic approach to harness the energy in the body so they can "accelerate healing and amplify healing capabilities." They use sound therapy, light therapy, and "the hidden properties of water" to help their clients feel their absolute best. Okay, maybe it is kind of mystical after all. I can understand why Denise had trouble summarizing what Aaron does even after attending Q 360, because perusing the website doesn't exactly give someone a clear picture of what these various therapies entail.

Q 360 offers body scans using something called a Sensitiv Imago Complex that can identify "stress factors" in the body, whether bacterial, viral, parasitic, or fungal. Then it somehow sends an algorithm back to the cell "to correct discord and realign the body back to homeostasis." This supposedly rejuvenates the client's DNA, making them look much younger and feel a lot better.

Denise posted a brief video on Instagram of some piece of machinery that Aaron uses at Q 360 Club. She captioned it, "My husband the mad scientist," with the hashtags #NicolaTesla and #FrequencyTuningFork. The video certainly looks like something straight out of Frankenstein: it shows a clear box with four long, thin wires that appears to creating some kind of electricity. How does one use it on the body? What does it do? I can't tell you.

Denise must know better than I do by now, because she's actually involved in the company. She's listed as Q 360's Media Advisor on their website. Perhaps she could suggest creating a Frequency Work For Dummies guide, so people like me can more easily grasp the holistic techniques offered by Q 360. But while I may not understand a thing about it, it seems like Aaron has a job he's passionate about, and that's always a positive thing.