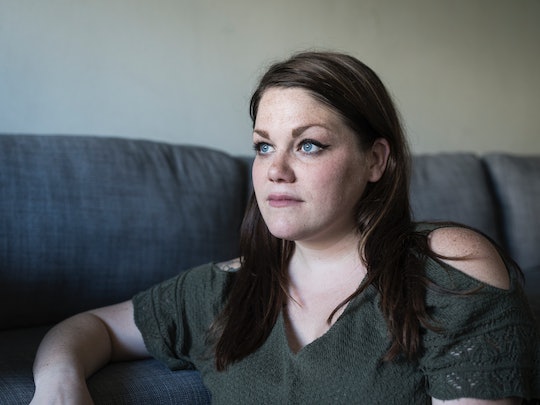 A&E's latest docuseries, Many Sides of Jane, follows a 28-year-old mother of two named Jane Hart who was diagnosed with Dissociative Identity Disorder (DID) three years ago. Jane has more than nine distinct "personalities" ranging in age from 6-28 into which she can slip during a dissociative episode. So viewers may be wondering what exactly DID is, and if it's anything like what they've seen on TV before.

DID was known as "Multiple Personality Disorder" until 1994, when the condition was re-characterized in the fourth edition of the Diagnostic and Statistical Manual of Mental Disorders (DSM-IV). According to Psychology Today, the condition is "characterized by a fragmentation, or splintering, of identity rather than by a proliferation, or growth, of separate identities." Psychology Today also notes that "DID reflects a failure to integrate various aspects of identity, memory, and consciousness into a single multidimensional self." In other words, while sensationalized representations of people with DID often frame them as inventing "characters," DID is actually a trauma response that splinters different facets of a person's already existing identity into separate personas. As Hart says in the trailer for the series, her goal is not to make her "parts" away; it's to integrate them.

One of the more prominent fictional depictions of DID on TV is in the Showtime series United States of Tara, which also stars a mom navigating the condition with the help of her loving family and therapist. The series investigates how trauma can lead to the disorder, rather than framing its sufferers as unhinged and destructive.

According to the American Psychiatric Association:

More than 70 percent of people with DID have attempted suicide and they also more commonly attempt acts of self-harm. Cognitive behavioral therapy, dialectical behavioral therapy, and hypnosis have all proven to be effective methods in helping patients with DID process their trauma and treat their disorder.

Other dissociative disorders, according to the American Psychiatric Association, include Dissociative Amnesia and Depersonalization/Derealization Disorder. All of these are characterized by dissociative symptoms, which can "include the experience of detachment or feeling as if one is outside one’s body, and loss of memory or amnesia."

In the case of Many Sides of Jane, the series actually follows Hart as she treats her DID with the help of a psychologist. Like many DID patients, Hart was a victim of child abuse and believes it is one of the factors in her mental health diagnosis. In 2016, she wrote a piece about living with DID for Elephant Journal, which led to an appearance on the psychology podcast Shrink Rap Radio. After hearing her story, A&E approached her with an offer to star in a docuseries about her own life, and Hart, feeling passionately about de-stigmatizing the disorder, accepted. The six-episode series premieres Jan. 22 on A&E.