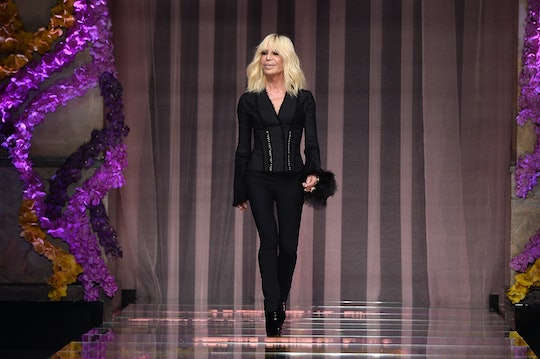 American Crime Story returns for a second season this month on FX and for the next installment of the anthology series, creator Ryan Murphy will investigate the murder of Gianni Versace. His business partner and sister serves as an integral part of the story, and Penelope Cruz will play her in the series. But what is Donatella Versace doing now? She maintains her position at the top of the Versace empire, she continues to design runway shows, and she remains a fashion icon.

Gianni Versace was murdered in 1997 at the hands of serial killer Andrew Cunanan, who went on a three-month spree, murdering five people before committing suicide eight days after Versace's death, according to The Hollywood Reporter. Versace was shot on the steps of his Miami Beach mansion as he was walking back from a coffeeshop to get the morning newspapers. No motive for the murder has ever been discovered. At the time, press speculated that Cunanan's spree and suicide were a response to discovering he was HIV-positive, but according to ABC 13 News, an autopsy revealed that he tested negative. Suffice to say, the reason behind the crime still remains a mystery and, due to his suicide, Cunanan was never officially convicted of the murder.

In the weeks following Versace's murder, Donatella and the rest of the family temporarily moved to a secluded resort in the Caribbean to escape the wall-to-wall coverage of her brother's death. She and her brother had been business partners since the 1970s, when she was initially brought on as public relations for his fashion brand. But her eye was so keen that she was eventually given her own label under the Versace brand.

She currently serves as Vice President and chief designer of the Versace Group, with a 20 percent share of the business. Upon Gianni's death, Donatella's daughter Allegra inherited 50 percent of the company. This past fall, Donatella designed a fashion show in tribute to her brother for Versace's Spring 2018 collection.

The Assassination of Gianni Versace: American Crime Story is based on the book Vulgar Favors by Maureen Orth, which itself is an unauthorized telling of the story. The Versace family have dismissed any authenticity in the series, saying in a statement:

For their part, 20th Century Fox and FX responded with a statement in support of the project, saying:

Like the original American Crime Story series The People vs O.J. Simpson, which was based on Jeffrey Toobin’s non-fiction bestseller The Run of His Life, FX’s follow-up The Assassination Of Gianni Versace is based on Maureen Orth’s heavily researched and authenticated non-fiction best-seller Vulgar Favors which examined the true-life crime spree of Andrew Cunanan. We stand by the meticulous reporting of Ms. Orth.

Cruz has met and interacted with Donatella in the past, and she told reporters at the premiere that she felt it was important to reach out to the designer and get her blessing before taking on the role. She said Donatella was glad that it would be Cruz playing her, which the actress said helped her feel good about accepting the role.