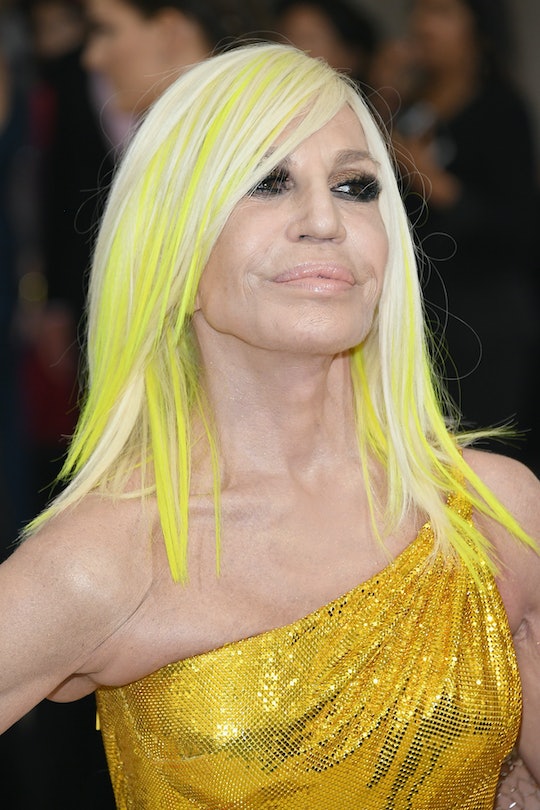 Donatella Versace Has A Very Impressive Net Worth

With Ryan Murphy's upcoming drama, The Assassination of Gianni Versace: American Crime Story, everyone has been talking a lot about the real Versace family. The most visible member of which is undoubtedly Donatella Versace. So how is she doing these days? What is Donatella Versace's net worth? This may come as a shock to some of you, but it's pretty darn huge. As the creative head of the venerable fashion house, Donatella is doing extremely well for herself.

According to most estimates, though these are not always entirely accurate, Donatella is worth around $300 million. Sure, that's not quite as much as her daughter Allegra, who inherited Gianni Versace's 50 percent stake in the company, but it's hardly a number to sneeze at. With $300 million in the bank, you can pretty much spend the rest of your life eating nothing but gold-flecked caviar brought to you by a team of liveried household staff. This is the kind of money that makes the Real Housewives cast members look like paupers. So I'm going to go out on a limb and say that Donatella is living quite comfortably these days. And hey, after all the work she's put in at the company, I'm also gonna go ahead and say she deserves it.

The Versace brand was started by Gianni in 1978, then called Gianni Versace Donna. Gianni quickly led his brand to prominence, and is even credited with inventing the "supermodel" as such models are now known, by paying models like Naomi Campbell and Linda Evangelista huge sums to work for him. Along the way, Gianni's label got help from his older brother Santo, and his sister Donatella. In 1989, the company launched a diffusion line, Versus, for which Donatella had full creative control. In a profile in The Guardian, Donatella describes the family dynamic in the company's '90s heyday thus: "There was Santo, the calm one; Gianni, the enfant terrible, and me – Gianni’s accomplice."

After Gianni's murder in 1997, an event chronicled by the new TV series, Donatella assumed creative control of the company, as well as a 20 percent stake. Her brother Santo got a 30 percent stake while her daughter Allegra received Gianni's own stake of 50 percent. In the aftermath of Gianni's death, Donatella had to learn how to run the company in his absence, eventually discovering how to come into her own. She eventually found her own voice and brought the company back to power.

In 2009, Versace was close to bankruptcy before they hired Gian Giacomo Ferraris as CEO, who helped revive the company's growth. Then in 2014, Blackstone Group purchased a 20 percent stake in the company. Because Versace is privately owned, it does not have to release its financials. But estimates valued the company at the time as $5.76 billion, though Forbes admitted that this number seemed high. In any case, the transaction greatly increased Donatella's personal fortune, as well as those of the other two key stakeholders.

As far as the new series is concerned, it doesn't appear that Donatella or the Versace family as a whole are too pleased with how Gianni's death (or the events surrounding it) are portrayed. The family first released a statement saying:

FX responded by defending the book, Vulgar Favors by Maureen Orth upon which the series is based, asserting that it was well-researched and definitely non-fiction. The Versace family then released a second statement reasserting the "fiction" designation and saying, "...it is sad and reprehensible that the producers have chosen to present the distorted and bogus version created by Maureen Orth."

Regardless, I'm looking forward to seeing how the series portrays this incredibly prominent family.