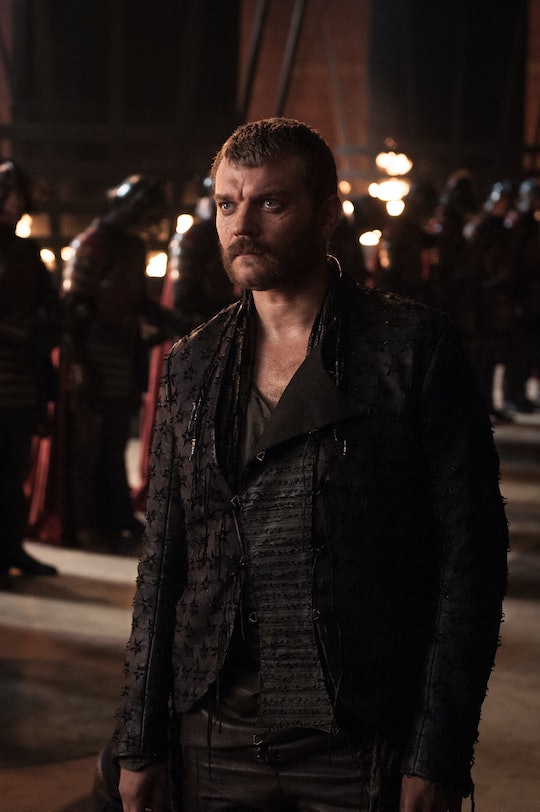 What Is Dragonbinder On 'Game Of Thrones'?

There are a few items from the book that haven't made an appearance in the show yet on Game of Thrones, some of which could be pretty important to the upcoming plot. What is Dragonbinder on Game of Thrones? It could have a pretty big part to play coming up, especially having to do with Euron Greyjoy, who recently underwent a punk rock makeover that I'm still trying to be okay with.

In the books, Dragonbinder is described as a giant black horn, made from what appears to be the horn of a dragon, encased in Valyrian steel and covered in Valyrian inscriptions. Euron apparently just happened to stumble across it among the ruins of old Valyria. It is said that the horn has the ability to control dragons, which is obviously a very important asset at this juncture in the story. The catch, of course, is that whoever blows the horn will die. It is written on the side, "I am Dragonbinder ... No mortal man should sound me and live ... Blood for fire, fire for blood." When Euron demonstrates the horn at the Kingsmoot in the novels, the poor guy who's job it is to actually blow the horn drops dead, and the maesters later find out his lungs were black and charred. Gross.

In the first episode of the seventh season, after she rejects his marriage proposal, Euron tells Cersei he will bring her a priceless gift to change her mind. Speculation is going wild as to what, exactly, this priceless gift will be. While many think Euron is going to try to kill Tyrion -- that was my first thought -- just as many believe that Euron is going to attempt to use the Dragonhorn to bring Cersei one of Dany's dragons, or else give her the horn outright. The only thing is that the Dragonhorn hasn't been introduced on the show yet. At this stage, it seems rather late in the game to be introducing a new magical artifact and it carries a whiff of deus ex machina.

On the other hand, Pilou Asbaek, the actor who plays Euron Greyjoy, teased that we might actually see the fabled horn on the show. In an interview with Vulture, he said, " Yeah, he doesn’t have an eye patch. Yeah, he doesn’t have the Dragonbinder … or does he?” This could be either cruel, cruel misdirection, or an honest tease of what's to come. Deus ex machina or not, I have a feeling the horn is going to make an appearance soon.