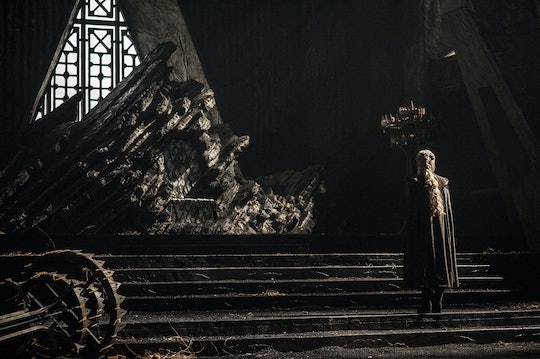 Daenerys Targaryen had been longing to return home to Westeros since the very first episode of Game of Thrones, but it wasn't be an easy goal to reach. It took years for her power to grow, and for her to find the right supporters and advisors. It wasn't until the end of Season 6 that she was finally ready to set sail for home, but she managed it. In the premiere episode of Season 7, she was once again walking the halls of her family's ancestral home Dragonstone, a place she had never seen as an adult. The castle had belonged to the Targaryens for centuries. But what is Dragonstone's history on Game of Thrones?

The name "Dragonstone" refers to both the castle itself and the island it sits on in Blackwater Bay. It began as a Valyrian outpost, but the Targaryens settled in Dragonstone for good after fleeing Valyria following the Doom, the disaster that destroyed it. They built their formidable castle using Valyrian stonemasonry techniques that made it unique to Westeros aesthetically, but also difficult to breach. The isolation of the island and the build of the castle made it near impossible for Dragonstone to be taken in battle, giving its Targaryen rulers a vast amount of protection. That combined with the dragons solidified their power. It was from Dragonstone that Aegon the Conqueror was able to take over Westeros.

Dragonstone remained in Targaryen control up until Robert's Rebellion. It was the place where Daenerys was born when her mother Rhaella took refuge there during the war. After Rhaella died in childbirth, Dany and her brother Viserys were sent into exile in the Free Cities and the castle finally fell. Robert Baratheon handed over Dragonstone to his brother Stannis, in whose hands it remained until his own death.

The island itself isn't exactly rich in resources, but it does produce one very important thing: dragonglass, also known as obsidian. There is an active volcano on Dragonstone that was helpful when it came to hatching dragons over the years, but also caused quite a lot of volcanic glass to form. That's important because dragonglass is the only substance that can destroy the White Walkers. With the Walkers threatening to invade any day now, having a lot of obsidian on hand will soon become a necessity.

Daenerys retaking her Dragonstone was the realization of years of planning and dreaming on her part. It was the first step in conquering the country and taking back the throne that Dany considered her birthright. It was a big step, and it's only the beginning.