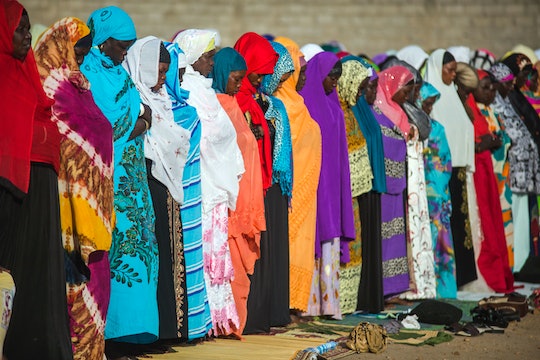 What Is Eid al-Adha? Muslims Worldwide Are Celebrating The Holiday

On Monday, Muslims worldwide began celebrating one of their religion's holiest holidays, the festival Eid al-Adha. Americans have been hearing a lot about Islam lately, but much of what is flying around the internet and out of the mouths of certain politicians is meant for fear-mongering, and not focused on the actual religion itself. So what is Eid al-Adha? The holiday, which is one of two celebrated by Muslims each year, brings with it many beautiful traditions.

Eid al-Adha is also known as the Feast of Sacrifice, because it commemorates the story of Abraham and his son. Many may already be familiar with the story, which appears in the Bible as well as in the Quran, albeit with a few differences, but for a quick refresher, God appeared to Abraham (or Ibrahim, to Muslims) in a dream and asked him to sacrifice his son to demonstrate his faithfulness. Abraham agreed, but before the sacrifice, God stopped him, and instead had him sacrifice a sheep.

On Eid al-Adha, Muslims similarly make an animal sacrifice, usually a goat or a sheep, and then share the meat with their families, neighbors, and the needy. One of the nicest elements of the holiday seems to be its focus on helping out those less fortunate. Celebrating Muslims donate the sacrificial meat to the poor, and also give things like clothes and money to charity.

The holiday starts with morning prayers, and then moves on to feasting with family and friends, and exchanges of gifts. It's a four-day festival, and is timed to coincide with the Hajj, the annual pilgrimage to Mecca that all able-bodied and financially-secure Muslims are required to make once in a lifetime. The actual timing of the festival each year is dependent on the sighting of the new moon in September.

So, about that timing.... As writer Wajahat Ali pointed out in a recent piece for The New York Times, the dependence on the new moon made for a potentially-tricky date this year. Many Muslims, particularly those in the United States, worried about what would happen if the holiday fell on Sept. 11. As Ali wrote, he has spent years wondering,

How can I, a dorky, brown, Muslim dude born in California and raised on Genesis and ’80s action movies, make you feel comfortable when you see me board a plane? I guess one thing I could do is not celebrate a Muslim holiday on 9/11.

With today's political climate, where one of the candidates running for president likes to falsely claim that he saw Muslims cheering as the towers fell, it's no wonder many Muslims felt a wave of relief with the announcement that the holiday would begin September 12 instead.

The panic that the close call inspired, though, serves as a reminder that there is so much more to Islam than the hate that some would have you believe.