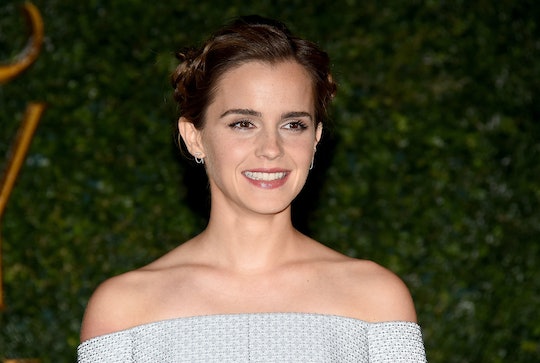 One of the best parts about the classic animated film Beauty and the Beast are the songs. Some could argue that they're what make the 1991 film so memorable. Between big numbers like "Be Our Guest" and "Beauty and the Beast," there will be a lot for fans of the original film to look forward to. Those unfamiliar with Emma Watson, who plays the lead role of Belle, might have wondered about Emma Watson's singing experience when she first took the role of Belle, but as the lead actor proved, everything was in good hands.

As Belle, Watson took on a lot of singing responsibilities in this film — from the film's iconic song "Belle," to the song at the turning point of the movie, "Something There," None of the songs, which have been fiercely beloved by fans for the past 20 years, were easy to tackle. But as soon as several clips and trailers were released prior to the movie's premiere, it became clear that Watson had the musical chops to keep everything under control.

Of course, it's understandable that people might be wary of the actor playing Belle. As a child, Watson first became a household name by starring as Hermione Granger in the Harry Potter film series. Since then, she has gone on to star in a number of roles — but has never sung in a film until Beauty and the Beast.

During an interview with Hollywood XYZ, Watson revealed that she used to sing as a child, but took a break from it to focus on other things. "I always had loved singing, but I took this massive hiatus," she said. "I used to sing as a child and then I made seven Harry Potter films, and went to university, and whatever else — so it was kind of like dusting the cobwebs off my singing voice."

Two years ago, when Watson first landed the role of Belle, she was "terrified," telling Total Film, according to The Telegraph, "I sing, so that's really unexpected. I've never had to do that for a film role before, and I think people will be interested to see me do something very different, like that." Watson added, "It gives me a challenge, really. That's terrifying in and of itself."

According to The New York Times, the film was initially seen as a risk due to Watson not being seen as a "strong singer."

But those who haven't seen the film yet shouldn't worry — it's not like Watson didn't prepare for the role either. When she first announced that she had won the live-action role, Watson said she had started taking singing lessons and was serious about doing the role justice. Watson's co-star, Luke Evans, who plays Gaston in the film, also told MTV News she has a "great singing voice to boot" and critics are already praising the film.

Belle is a beloved childhood character for so many, and if the early critic reviews are any indication, Watson certainly didn't disappoint.