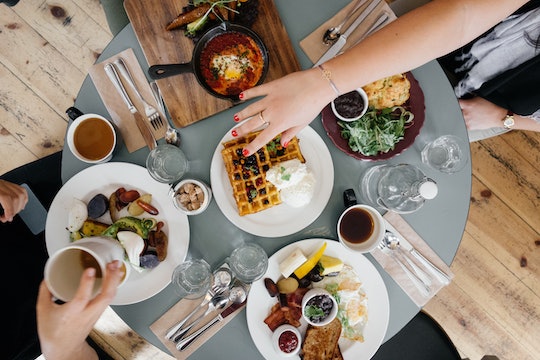 What Is Emotional Feeding?

Giving your child a small piece of candy for going on the toilet while potty training, giving them a lollipop for waiting patiently at the store, taking them out to their favorite dinner when they get good grades — these are all examples of emotional feeding.

Emotional feeding, according to ABC News, is the practice of using food as a means of comforting and rewarding your child. It's a tactic that most parents, especially those who limit sweets in their house, employ with their children. Sometimes all it takes for your kid to calm down during a temper tantrum is to tempt them with a sweet treat they might not get otherwise. But one study has found that this might be a problem.

A recent study, conducted in Norway, found that school age children whose parents fed them to soothe their negative feelings were more likely to emotionally eat, when they were sad or upset, later on in their lives. But these kids who emotionally eat are not eating carrots, either. The study found that emotional eaters were more likely to eat high calorie foods, such as sweets, which could lead to unhealthy eating habits formed at any early age.

While feeding your child when they're sad to cheer them up or to stop them from throwing a tantrum is bad, rewarding them with food for doing a good deed could be worse. A 2016 study, conducted by Aston University, found that using food as a reward or treat could teach their children to also rely on food to cope with things like stress. As someone who was rewarded for doing childhood chores around the home with a small bowl of mini marshmallows and will dive into the pantry during moments of high stress during adulthood, this sounds strangely familiar.

These studies only stress the importance of developing positive eating habits with children at a young age. When it comes to rewarding children with food, the University of Michigan recommends rewarding them with a family bike ride or positive affirmation instead. And when it comes to soothing your child with food, it all comes down to eating habits. Parents should encourage their children to eat as a family, according to ABC News, and recommend parents talking about their child's emotions, rather than feeding them food.

While I love my mini marshmallows and how they make me feel, I don't love the feelings associated that bring me to eating them. Parents should take note of the implications the next time they use food as a reward or comforting tool.